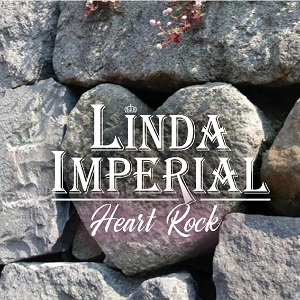 Linda Imperial’s latest release Heart Rock is an EP worth of songs packing a punch as any full-length album. Imperial evidences little if any interest in writing and recording superficial entertainments. Her music will definitely bring smiles to the faces of many listeners, but her overriding reason for writing and recording these songs is catharsis. She has worked with some great talent from the last fifty plus years, among them Jefferson Starship, New York Jazz Explosion, and Gary Duncan’s Quicksilver Messenger Service. She has enjoyed a thirty year plus marriage to legendary rock musician David Freiberg and pays tribute to his presence during this collection.

The first track “I Found Me” is an ideal opener. Pairing Imperial’s silky blues voice with the lonesome wail of harmonica is a natural combination. There’s a roots music slant to Imperial’s songwriting, but it never takes a purist direction. Her lyrics hit on an effective balance between an authoritative tone and vulnerable tone. She has an unabashed willingness to depict her personal journey through song while filling it with the same indefatigable spirit that empowered her to come through.

Backing vocals deepen the beauty of “I Found Me” and do the same for “You’re a Fake”. They sweeten the unhappy message of Imperial’s lyrics but the whole track is a model of understatement. Imperial’s insistence on communicating her dislike of the song’s subject in such a polished and stylized manner helps makes this cut exceptional. Drummer Kevin Hays’ performance steadies the ship from the outset and Joel Jaffe’s tightly controlled fills flesh out the arrangement with the right amount of color.

The album’s nominal title cut “My Heart Rocks” is as impassioned as things come during this EP. Imperial’s lyrics provide listeners with a look at the songwriter unvarnished, bloodied perhaps, but unbowed. The musical inspiration fueling tracks such as this is high octane without ever burning too fast; Imperial and her cohorts alike understand pacing well. The songs included on Heart Rock achieve effortless atmospherics arising from nuanced arrangements rather than slick gimmickry.

Imperial’s band shines once again during the penultimate track “Just Right”. This outright love song to her husband of over three decades benefits from a warm and confident all-around performance from Jaffe, Hays, organist/keyboard player Eammon Flynn, guitarist Marc Cooper and bass player Marc Levine. It is important to present a coherent and unified sound when recording either an EP or full-length album. Imperial achieves that with Heart Rock and Jaffe’s production work underlines its strengths.

Linda Imperial ends the EP on an emphatic note with “The Storm is Over”. It’s a mid-tempo blues rock-influenced track with fiery flourishes of lead guitar. These sorts of tracks are well matched to Imperial’s sensitive yet sure-handed phrasing. This is a sturdy and rewarding release; you will be hard-pressed to find anything even hinting at filler. Linda Imperial’s talent and facility for interpreting songs remains undimmed by the years and Heart Rock resounds with her continuing creativity.