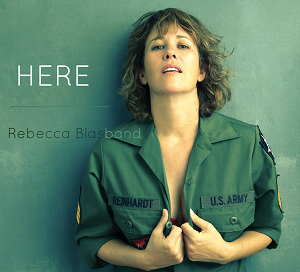 The mood is rich, mellow, hazy, and almost subtly uncertain, but empowered nonetheless in Rebecca Blasband’s single and video of the same name, “Here” from the album of the same name. Blasband who first rose to notoriety thanks to appearing on the first season of MTV’s The Real World, has very clearly stepped from underneath the shadow of anything formerly connected to that part of her life, having worked as an accomplished screenwriter and musician who’s opened for many acts from MatchBox 20 to Jon Bon Jovi.

I’ve noted a rise amongst artists of a certain generation clinging onto the sounds that they came up with and I’ve listened to a fair share of musicians be unwilling to change their sound to evolve with the times, but Blasband is no such artist. Her work is distinct and the sounds ranging from guitar-focused ditties with sweeping strings or more percussion-heavy tracks definitely have the *feeling* of the early 2000s, but the aesthetic is also very modern, like stepping into a Los Angeles art deco apartment. The perfect complementary mix of old and new. Her voice is rich with passion and has been a performer for so long, her voice is rich and textured, harsh when conveying the heavier more aggressive emotions, but she has this affable quality to her as does the song and video. In aesthetics, the video is very bohemian with a lush beautiful brown landscape that is a nice shift from the initial black and white start that makes one think of coming out of a depression, potentially as Blasband may have as this song and the album it’s from feels incredibly personal.

As the video flows along with its beautiful bobbing cinematography, you feel close to her and her voice in a way that almost has this vaguely supernatural element especially with the ways the video incorporated fade effects. It’s a treat for the staples of early 2000s music videos in its looks and in a way almost carries this vintage feel that also goes well with the music as the song feels so beautifully lived in like it’s existed in popular culture for some time and we need a refresher. Blasband has such a distinct control over her voice that even when she hits the highs of the course, it never feels like she’s belting, but the cadence in her voice is just so commanding and captivating, she’s not lost any steps in her keeping her voice at top-performing abilities.

Blasband wants to open a dialogue as she says with the lyrics “all it takes is a conversation between the stranger and the strange” and even potentially draws parallels with the anxieties as a performer with thoughts on identity and being forgotten and it’s so inspiring and raw to see a performer reach to such introspective depths and you get swept up in the feelings as the beautiful string accompaniment kicks in that is just so rich and fully completes the experience. Blasband is here, and she’s bringing some of her best work with this single.