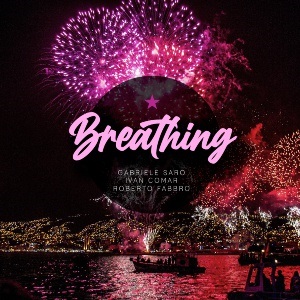 Talking Heads frontman David Byrne once wrote a controversial article about abolishing the term “World Music”. He felt the title was reductive because what differentiates music from “world music”? I tend to agree and there’s an interesting example to be used in the recent singles from Gabriele Saro, Ivan Comar, and Roberto Fabbro’s “Breathing” and “GANGSTA”. Full disclosure, these tracks were kind of an anomaly for me as I could see them being for some standard American audiences. Whether be design or not, they feel for like of a better term, “vintage”. Not in the sense that they sound decades old. in fact, these songs like they’d exist peak 2007-2009, which might not seem that long ago, but check the Billboard Top 100 back then and you’ll quickly remember how different that time was. The sound of these songs feels like they were ripped from your Usher or early Katy Perry of that time, with a stripped-back almost R&B/Pop sound, especially in “Breathing”.

Something that should be noted is that these songs come courtesy of Italian musicians and it’s certainly a fascinating and often enjoyable window potentially into their trends because while there are echos of American Pop, they definitely feel distinct from their own country. There’s a little issue I have that’s not really at the fault of the creators, but there seems to be a disconnect of lyrics to music sometimes, by which I mean there’s a bit of a broken English barrier. I could be wrong, and maybe they’re being deliberately obtuse and experimental, but sometimes listening to the songs, I was just a little confused by what they were trying to impart lyrically.

It’s not bad by any means, both of these songs are very enjoyable, but sometimes I was a little confused on what exactly they were about, even with the benefit of the beats to help fill the gap. “Breathing” to the best of my interpretation feels like it’s about feeling passion, whether it’s just coming from inside or trying to connect with someone without wanting there to be a lot of difficulties involved, but when you have lines like “I tried the living, I tried the speaking, in the place without a light”, like I said it can be a little confusing. For those who might be put off by the lyrics, I’d just enjoy them as vibes.

They’re the kind of songs that would feel perfectly in place at a club or a high-end bar and if you’re the type where lyrics don’t matter as much it might really strike a chord with you on a visceral emotional level. “Gangsta” has similar issues with the lyrics especially the questionable use of the titular word, but that one is an uplifting ballad about being your own person and living on your own terms, not bound by others. My slight issues aside, there’s so much to actually enjoy about these songs, and this group has an extensive back catalog of fantastic work I highly recommend checking out.

The music of Gabriele Saro has been heard all over the world in partnership with the radio plugging services offered by Musik and Film Radio Promotions Division.  Learn more https://musikandfilm.com