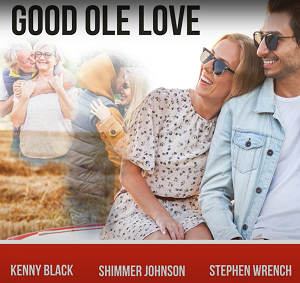 “Good Ole Love” is a song that only comes around once in an inspired blue moon, as does the pandemic it was written in, by Kenny Black, Shimmer Johnson, and Stephen Wrench. A combo in which I am not previously familiar with but would not mind hearing a lot more from where it comes. And if you are looking for something smooth, mellow, and soulful to keep your spirit alive and your relationships strong in the hard times, this a go-to number for that. I was left with that tendency to want to hear it time and time again, which I have done.

Mid-April is the best time to release music, and that is something I have known as a longtime consumer and collector, so this could not be released at a better time, considering the circumstances and all, it is almost like a bottle of potion for stress relief. But at first, I did not know what I would be hearing, so I got something unexpectedly soothing and comforting, rather than run of the mill stuff. This also combines with the fact that I watched a video and was also expecting another lockdown throw together job.

The video actually-helps to define the mood which helps pulsate the tune, and that can go either way with video. It comes recommended on both fronts but goes the distance with a touch of class the video provides, with some road and beach coverage that bring out the romantic qualities in the song. “Good Ole Love” speaks volumes for itself in the title alone, but that is mostly likely where the fun comes into a song. They key to all is in the way they simplify an emotion into a song title and let it do the rest, it is a well-written, produced and arranged audio and video track. Also sung very well between male and female vocals.

I find this song to essentially be for the adult contemporary masses, and largely spiced with R&B and some maturity that keeps it aimed for such older audiences, but anyone can agree it is as undeniably awesome as a summer’s day. You just do not get stuff like this dropping on a regular basis in today’s dime a dozen single releases world, as they seem to follow an algorithm to nowhere. “Good Ole Love” defies that pattern of going where the trends go and gets back to what good music and relationships are all about.

The one hard thing to do when hearing artists for the first time, is give them their rightful due without repeating what is already out there. I would give that more space here if I knew more, but what I do know this is a killer track and I would just like to hear more as a result. The power of love and music come together here for a magnificent and groovy lockdown number. The more I listen to it, the more it does the business, and you cannot top that for what it is worth either.