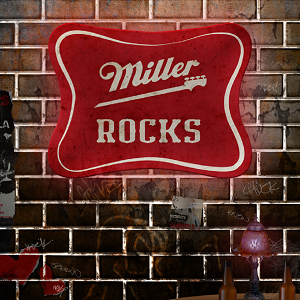 Solo projects can oftentimes come out of three things: vanity, inspiration, and (least likely, yet still possible) utter boredom. It’s not every solo project that finds itself existing out of pure and total necessity, but for Robert Miller, this would end up being the case with his album Miller Rocks, written and recorded entirely in lockdown during the infamous coronavirus pandemic of 2020. To most, Robert Miller is most notably known for founding and fronting Project Grand Slam, an 8-piece musical collective with ten albums under its belt since forming almost fifteen years ago, with the group’s music all being written and arranged by Miller.

So what exactly inspired the sole, driving force of a man behind nearly a dozen albums to strike out on his own and record a solo piece? First, it’s worth noting that this is the second solo outing for Robert Miller, with Summer of Love acting as his solo debut, which was also written amid the pandemic but with the assistance of his band. Miller Rocks sees Robert Miller branching from collaborating with his bandmates remotely to bearing full creative responsibility to an even further degree than seen within his work before, and the hands-on approach can be felt distinctly with Miller’s fingerprints visibly on every track.

The mesh of jazz and jam-band rock sensibilities housed within Miller Rocks make for a fantastic and pleasant listening experience. Audiences will instantly be able to tell that the album was made first and foremost as a way to further hone the musical skills Robert Miller has already polished beyond that of most, and secondly to escape the alienation and melancholy of the world’s current proceedings. Listening to this album, one couldn’t possibly tell it was made in direct response to a global crisis, but Miller Rocks ultimately functions as just what the doctor ordered by delivering perfect counter-programming in its tone and message. The album touches a variety of sounds and influences within its brief runtime and works as a great escape into music that feels as genuine and as timeless as ever with its ensemble of instruments recalling the musical landscape that bridged the 1960s and 1970s through rock ’n’ roll without ever stooping to cheap or derivative territory.

Some standouts well worth giving praise to include “To the Zoo!,” as well as “To Heal My Heart.” These two songs encompass the entirety of the scope the album sets out to achieve, and it manages to touch both ends of the emotional spectrum between joyous and heartbroken without missing a beat. The latter clocks in at five and a half minutes, yet never overstays, and feels fully actualized as the emotional center for this project as a whole, incorporating a gorgeously lavish saxophone solo that elevates the song even further. Robert Miller has something substantial within Miller Rocks, and his calm and cool demeanor across its ten tracks only further adds to the personality encased within. Here’s a professional showcasing what he loves to do, and it shows.