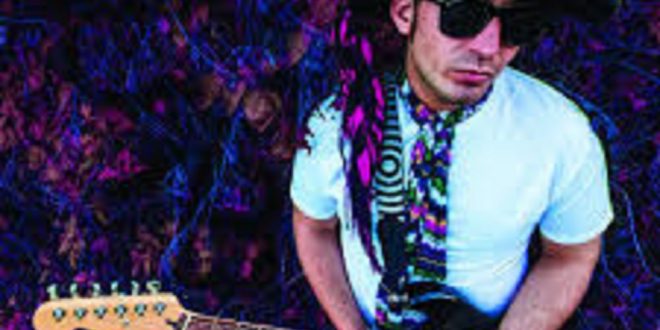 Stampeding from beyond the silence, a bold drumbeat comes galloping through our stereo before giving way to a sharp lead guitar bent on cutting into our souls one note at a time. The lead scratches against a synthesized tidal wave of anti-melodies, eventually combining their forces and saturating everything within earshot in studded grooves. Vocals penetrate the eye of the storm and soften the blow of the instrumentation, but even as we descend into the guts of “Stomach Coil,” The Chris Ruben Band’s hot new single, there’s no evading the suffocating tone that turns this black and white rock song into a full-fledged artistic battle cry. Lacking all of the commercial varnish that has been known to taint similarly ambitious rock n’ roll fodder, “Stomach Coil” is an authentic slab of vibrant physicality for a generation desperate to be moved by their music.

We wade through the verses alongside Chris Ruben and quickly find ourselves embracing his rebellious attitude. There’s a grittiness to his lyrical execution that is next to impossible not to emulate to some degree; his smooth delivery and swaggering vocal is surprisingly inviting, infectious even. While this approach comes from the same place that 80’s hard rock arrogance once spawned, The Chris Ruben Band goes out of their way to avoid the negativity that comes with excess by giving themselves over to the lush, organic sonic sway of their beats. Their volume-drenched riffage remains intact at all times and actually benefits tremendously from this stripped down, meticulously equalized mix. You don’t have to be a music expert or even that familiar with this band to tell from this song that they take the recording process pretty seriously.

The brittle vocals would, on paper, be getting clobbered by the swirling bassline were it not for the buffer that the hollow-point percussion creates between the two. It’s understated differences like this one, though, that really set The Chris Ruben Band apart when discussing them in the context of their peers and modern music in general. Instead of throwing together something genuinely ramshackle and halfhearted under the guise of some faded punk rock ethos that is, in all honesty, irrelevant to today’s ignorant, plastic-obsessed pop consumer, this group takes their time really cultivating their songcraft and perfecting every working gear in their greater engine of sound. The result of their labor is a song like “Stomach Coil,” that neither owes something to a larger scene nor takes its inspiration solely from the band’s forerunners.

Running just over three minutes in length, “Stomach Coil” isn’t the anthological rock epic that “Bohemian Rhapsody” or “Stairway to Heaven” is, but inside its gilded riffs there’s just as much rip-roar detail, intelligently-orchestrated rhythm and carefully applied exoticisms to make it look and feel like a swansong. I still think that they’ve yet to reach their complete and total potential, but a track like this one definitely shows that The Chris Ruben Band is getting better and better year after year. If this is but a taste of what’s to come next, 2019 will likely see their undisputed and long-awaited breakthrough into the mainstream – which could really use a group with their panache at the moment.