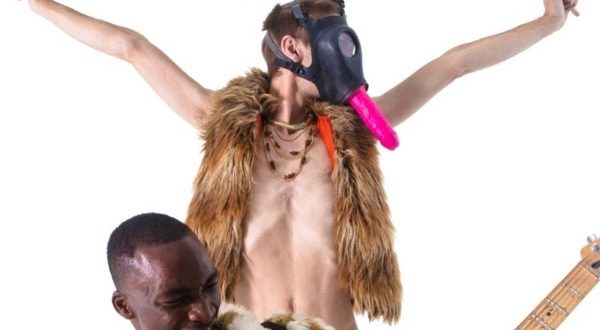 Sexy melodies and muscular rhythms meet blistering, raw tonality in the brand new EP Cal-Island: Season 1, from California’s own Sex People. Sex People are a new arrival on the scene but have anything but an amateurish vibe to their agile, tightly wound music. Cal-Island wastes no time sinking its urbane teeth into a vicious groove with “Like a Queen,” which comes blasting through the speakers like a bat out of hell and soon washes everything within its reach in an opulent synthesized harmony that will instantly leave you craving more.

The band doesn’t let their foot off of the gas pedal for a second as we crash through the sterling “Sanctuary City” and shoegaze-inspired “The LA Air,” which beats us into the ground with a My Bloody Valentine-style riff before cushioning the tizzy of hollow percussive beats with a vocal force to be reckoned with. Say what you will of modern trends towards the spacey and psychedelic, but what Sex People have designed in this incredibly well-rounded debut offering is as engaging a listen as you’re likely to find this winter, or for that matter throughout the rest of the year.

Cal-Island progressively gets more intense and intricately composed as we make our way through the five individual songs on the EP. By the time we reach the fourth, “No West Left,” you could plausibly make the argument that Sex People have touched on most of the ground that their sonic profile is capable of covering, but I would beg to differ. “No West Left” follows the same experimental pattern that “The LA Air” does, but totally goes off script in its shapeless chorus that resembles ambient rock more than it does balanced, hard-electronic pop. “Mr. Emperor” similarly makes a point of rehashing a couple of highlights that we’re first acquainted with early on in the record but then find twisted into a heap of artsy melodic mind-benders near the finish line. On paper this EP sounds much more complicated and inaccessible than it actually is; in reality, for how multilayered and defiantly different Cal-Island is structured to be, it’s a very easy recording for even novice pop enthusiasts to get into without much of a preface.

If this is to be our first glimpse at Sex People’s music in its most unrefined, unfiltered and under-budget state, these California musical masterminds are going to ascend through the pop hierarchy much faster than any of us could have predicted coming into this year. The stage was unquestionably set for their arrival, as there hasn’t been a whole lot of thrilling content to be discussed out of either coast’s scenes in the American pop music underground, and a record like Cal-Island: Season 1 has what it takes to possibly be a game-changer for a style that really could use a makeover. There’s a moment in the final chorus of “Like a Queen” where it feels almost as if we’re listening to the band within the acoustic environment afforded by a stadium rather than that of a confined studio, and the sound couldn’t be much more haunting and heart-pounding. Were I a superstitious person, I might be inclined to see that as a probable omen of bigger and better venues to come their way as their career starts to take off.