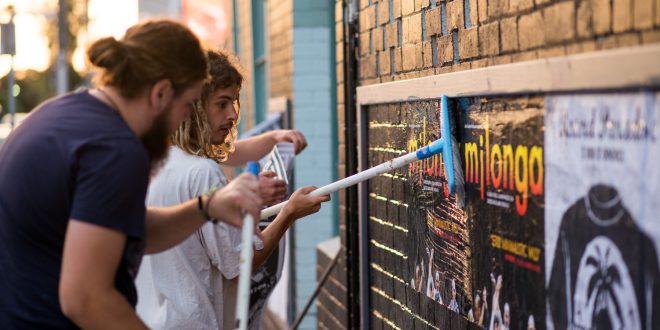 Many bands have learned the power of “word of Mouth” via an effective Street Team. Street Teams’ are a powerful promotional tool that has been adopted industry wide as a standard line item in marketing budgets by entertainment companies, record labels, the tech industry, corporate brand marketers, new media companies and direct marketers worldwide. This is because they are a highly effective marketing tool. Street team members that are highly trained are now called Brand Ambassadors. They are the army that does the ground work in promoting a band or artists. Below are just some of the things an effective Street Team can do for a band.

– Placing stickers and posters in their communities

– Bringing friends to the shows

– Phoning your local radio station to request their songs be played

– Maintaining zines or websites dedicated to the band

The position of street team representative is often filled by fans of an artist or young people looking for an introductory position in the bands activities, or music industry in general. In many cases, an influential teen referred to as a neighborhood “tastemaker” was sought out or pinpointed by a record label to be used as a conduit to their respective neighborhood, due to their stronger influence over other teens that looked to them for “what’s hot” or “what’s the next hot thing”. The tastemaker was directed to create a team on the streets to make an unsigned music artist more popular through word-of-mouth and hype. Most inexperienced bands usually expect their Street Team to fall out of the sky for them, the key is providing a motivation for all their hard work.  When you assemble your Team make sure you provide incentives. Be creative when creating these incentives. In some cases, points are assigned to an individual for a particular action, and those points can be exchanged for tickets to shows, or for band merchandise, inside access to band event and parties, VIP & backstage passes, and even small door percentages.