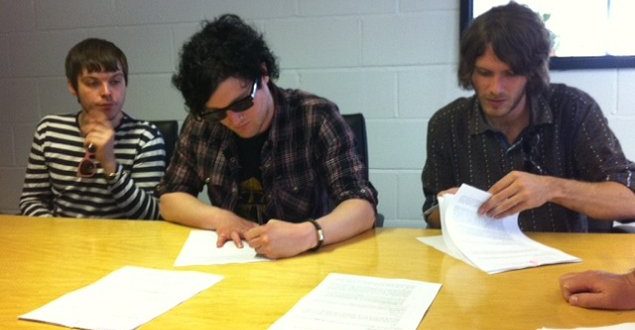 The Basics of Legal Contracts

In the Music Business a “handshake” or verbal agreement is quite acceptable, not to mention it can even be used in the court of law. However when things don’t go according to plan, I’ve seen the golden handshake turn into bad situations in a hurry, especially when the things that don’t go as planned involve money. People who think they don’t need legal contracts in the Music Business are either inexperienced, naive about the people in Music Business, or have such a solid reputation that people don’t dare cross them. True – it’s all about trust, but a Legal Contract eliminates any possibility of a mis-communications happening, or those instances when things don’t go according to plan, It also protects both parties.

Take a popular reggae band from New York who got invited to play at a major Political Rally a few years back in Washington D.C. The band got the informal invite, spent thousands of dollars getting everything together for the event, which was televised on National TV. The exposure was going to be huge for them. When they showed up they got bumped at the last minute fill by a huge recording artist, and as a result got bumped out of their prime time slot without hesitation. In fact they got bumped altogether. The Bottom line – there was no legal contract to make sure they got what they were paid a lot of money to prepare for. Of course, the more money that’s involved, the more the need a contract. If being a Rock star is more like a hobby to you, then you probably don’t need one. But if you want to make a living at this, or act like a paid professional you need one. I also recommend you hire a Legal Consultant, or Legal “go to guy” if you’re serious about making this a career. Contracts can be very intimidating, and should not be drafted up by amateurs. Besides it makes you look professional when you say – “Send it to my Music Lawyer.”

There is no perfect contract for any situation, and there are too many clauses to touch on in this article. You could write a book on Music Contracts. I’ve seen record contracts as thick as a phone book. A common practice is to make a brief standard contract, and attach a rider for specific situations. Remember it’s nice when things go according to plan, it’s also nice to know your covered when they don’t.

Here’s some important considerations I’ve seen bands get burned on over the years.