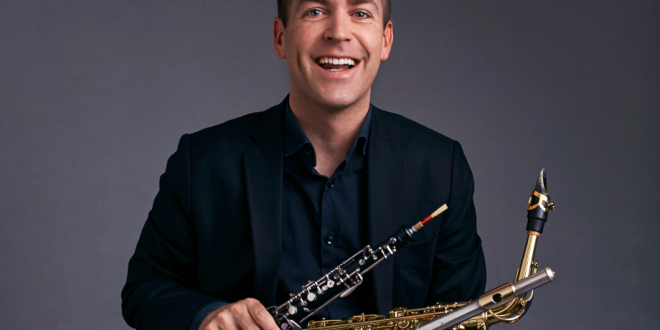 The Boston Globe recently described our music as a mix of modern jazz, folk, and minimalism. I love that description!

I love the music of Ornette Coleman, Paul Desmond, The Smiths, New Order, and Steve Reich. I generally love any music that has a great melody and displays a vibrant sense of honesty. I despise any music that lacks integrity or soul. I see no boundary line between any genre of music. I am equally influenced by Steve Reich’s “New York Counterpoint,” Ornette Coleman’s “Skies of America” and Stravinsky’s “The Rite of Spring.” All are masterpieces. I transcribe Paul Desmond saxophone solos every week. I just transcribed his solo on “Out of Nowhere.” The first jazz recording I ever owned was a cassette tape of “Two of Mind,” a pivotal album featuring Gerry Mulligan and Paul Desmond.

Expect the unexpected! You will hear original melodies, as well as American folk music references and elements of Celtic music. Our live concerts take many creative detours and spontaneous turns. We love to engage the audience. Every night is different!

The music scene in New York City is world class. Every night is different for me. When I’m not touring as a bandleader, I play many theater gigs in the city. I play woodwinds every week in the off-Broadway show, “Blank! The Musical.” The show was created by improv comedy writers from Second City, Improv Boston, and Upright Citizens Brigade. I play the “Experimental Tuesday” concert series at the Residence Inn Times Square hotel every week. Daniel Bennett Group also plays every month at Tomi Jazz, a beautiful jazz club in midtown Manhattan. The New York scene is fast paced and always evolving. It’s very competitive, but also so rewarding at the same time!

I saw a multi-media performance of “Koyaanisqatsi” with the Philip Glass ensemble at the Eastman Theater in Rochester, New York. That was absolutely incredible. Life changing! I was in college at the time. It was so inspiring. I really love the beauty and energy of playing music live. The audience and the artist are feeding each other with this energy. It’s beautiful!

“Gold Star Mufflers” was a very important song for me to record. Mark Cocheo and I recorded a total of 14 instruments on this particular song. As you know, the entire album is a duo performance. We recorded all of the wind, string and percussion instruments, creating the sound of a large ensemble. Totally insane endeavor for two people, but we did it! We mixed futuristic avant-pop with opera themes by Giuseppe Verdi and American folk music. And I think this particular song showcases our vision perfectly.

The Daniel Bennett Group tours quite a bit. We just returned from our fourth west coast tour. I have improved as a player and composer. I have more focus and drive. There are always new things to learn for any artist. Life is a journey!

I would love to sit down with Steve Reich. I first heard his “Violin Phase” and “Piano Phase” when I was a student at the New England Conservatory. To this day, Reich is my biggest influence. His “Music for 18 Musicians” composition was a huge influence for me. I also love his vocal piece “Tehillim.” I also love his beautifully catch “8 Lines” composition. I recently transcribed the flute solo. Reich is a special person. His music is strongly influenced by his Jewish identity and his love of history. Such a fascinating composer.

Daniel Bennett Group is busy promoting “We Are the Orchestra.” This album is very special for me. We will be touring all over the world this year. Next stop is our annual Florida tour. I am always writing new material. There is always something new on the horizon!