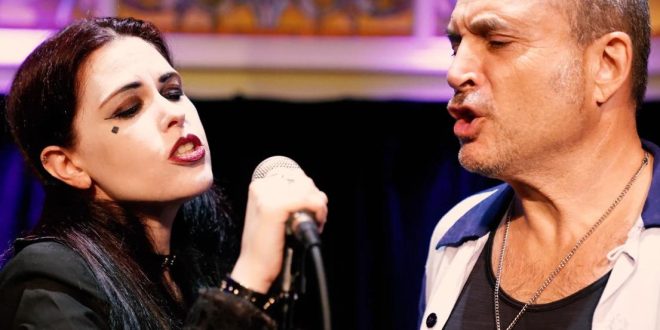 You’re about to drop the LP, Killer Instinct, on November 11th. Is this your full-length debut? Or do you consider 2020’s Home your debut release?

How would you classify your sound?

The first single off the album is the addictive “Scary Voices.” Did you write the song with the intention of making a Halloween single? Or was it more organic?

It was really organic. The song started out as a Covid pandemic song called “Living in a Bad Horror Movie.” It seemed like every turn during the height of the pandemic felt unreal, and more like a bad horror movie. The chorus was always “Lie awake at night and scream – hoping that this is a dream.” Then I actually got Covid and had the weird mind tricks that came with it, and that’s when “Scary Voices in my head” came to me. From there it turned into more of a Halloween single. That was definitely not the intent, but we have had a lot of fun with it!

Did you shop Killer Instinct to record labels? Or do you prefer the indie route?

We didn’t really even think about record labels. I like a lot of elements of the old-style DIY. One of the songs on the album – “She Loves Rock and Roll” – is a homage to Joan Jett, who famously couldn’t get a label to sign her, so she started her own. We’re not against record labels – we just weren’t in that place when we recorded Killer Instinct.

How did you guys come to be so philanthropic? Was that by design from the very beginning?

It was by design from the start. Philanthropy is a tradition for Seattle musicians like Pearl Jam, Foo Fighters and Macklemore. As a matter of fact, we delivered a $1,278 check to a local homeless shelter called Mary’s Place last December. While we were there they told me that Macklemore had been there five days earlier delivering a much bigger check! We wanted to start giving right away, even if we never make it big like Foo Fighters. It may sound corny, but we really do believe Rock and Roll can make a difference in the world.

What song on the new record was the most fun to record?

Scary Voices – we had a lot of fun getting those really cool spooky sounds. That is guitar with a secret combination of pedals!

Is there a song on your Killer Instinct that stands out as your personal favorite?

My personal favorite is “Negative,” but it’s hard to choose! I like “She Loves Rock and Roll” because I have a singing/speaking part at the end!

Who are some of your biggest musical influences?

Everyone knows the rich history of the Seattle music scene. How’s the scene these days?

The Seattle music scene is always awesome. Everyone knows all the big names, but new bands are always coming along to rock the world – Enumclaw is one of the latest examples. It helps to have the best radio station in the world in our town – KEXP!

What’s next for the band?

We really started this band at the outset of Covid, so we had to have a different focus than what is usual. There was no place to play live, so we focused on making, recording, and releasing music. Now that we have Killer Instinct out, we plan to start playing live again after the Holiday Season. We are working on a multi-media live show that we think is really cool!