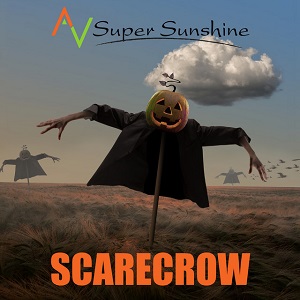 The left field in alternative pop/rock is having a good autumn, and this statement applies particularly to one AV Super Sunshine, a veteran player whose new single and music video “Scarecrow (Rock Mix),” one of two versions of the song currently out, is capturing the attention of critics around the continent at the moment. AV’s conservative approach to the B3 organ melodies blended with his deeply enigmatic and, in this instance, downright spooky poetry give “Scarecrow (Rock Mix)” a very easygoing, classic pop feel with a uniquely Halloween-inspired finish, and whether you’ve been following his career since the beginning or are just now discovering his music for the very first time, it’s an easy listen at any rate.

Everything in this track revolves around the verses AV dispenses with ease from behind the microphone, and I would even make the argument that this is one of the most aggressive releases to join his discography in the last four years. There’s so much emphasis on both his execution and the content of his statements here, but scarcely is there an instance where we’re asked to split our attention between the lyrics and the music disproportionately; on the contrary, “Scarecrow (Rock Mix)” is produced with the kind of attention to detail that makes it easy for us to enjoy all of its components without getting overwhelmed or distracted by particularly glowing elements in the mix. The mood, the energy, and everything else in the arrangement create continuity around every turn.

Both the single and the video were mastered to appeal to casual pop fans and serious Halloween aficionados alike, and though the music video for “Scarecrow (Rock Mix)” is quite an enjoyable watch, it wouldn’t be nearly as stimulating were it not backed with the exquisite soundtrack that it is here. AV Super Sunshine is a very expressive songwriter, and truth be told, he doesn’t even need the frills featured in this latest release to make an honest impact on his audience.

Compositionally speaking, “Scarecrow (Rock Mix)” is a little more involved than I had envisioned AV wanting to pen at this stage of his career, which isn’t meant to dismiss his credibility as a longtime player in the underground pop scene. Oftentimes, when an artist has been as active as this one has, the distance between the experimental attitude that gave their music appeal and the comfortability which comes with following a winning formula becomes too much for both critics and devoted listeners to contend with, but in my opinion, AV is aging with his medium better than any of us could have expected him to.

AV Super Sunshine continues to surprise his admirers and accredited ears in the music industry alike with the release of this latest single and its companion video, and if you ask me, he’s going to be one of the more interesting artists in his scene to watch once again in 2023. Judging from the ambitiousness he’s brought with him into the studio for this latest dispatch, it’s hard to see the momentum his career is presently enjoying starting to slow anytime soon, and while “Scarecrow (Rock Mix)” is a new high point for the Halloween season, I doubt it will be a creative peak for this player.