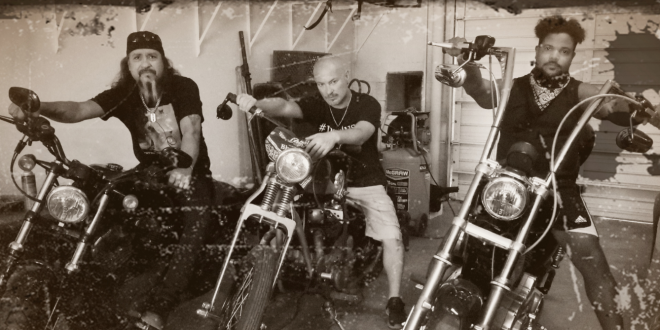 Does social media make it easier or harder for a musician to stand out these days?

Good morning!  Nice to be with you, wherever you are…

Social Media makes it easier in that there are so many avenues to promote yourself, basically for free, that are easy to use.  Problem is, EVERYONE ELSE is doing the same thing.  So, the universal truth that seems to transcend trends and mediums is that great art will rise to the top, and the mediocre pablum might have a short run of success but will ultimately fall by the wayside.  What lasts? That’s what I am aiming for…

You are out on the road making new music – tell us more about that.

Indeed!  Just left the studio in El Paso after driving with my son and Manny (Tejeda, bass and backing vox in Little King) from Delaware with all of my stuff in an SUV and trailer. I moved from Delaware to Arizona recently, and I also lost my driver’s license due to idiocy, so Manny kindly schlepped us down to the desert. We had 7 songs ready to go, so we stopped and saw my daughter in El Paso and cut the tracks at the same time.

The new album is called Amuse de Q, and all of the bass, drums, and about 80% of the guitars are done.  We will go back soon enough to finish my solos and “eyebrows” on guitar, track a piano part my son is playing, some extra bits, and of course the vocals. I am just finishing the lyrics and vocal melodies now.

We are particularly enthusiastic about the new material.  It’s only been a year since we recorded Occam’s Foil and the first time in Little King’s 23-year history that I have kept an entire lineup from one record to the next.  The synergy, energy, and cohesion we feel this time around is translating…I think people are gonna love Amuse!  The songs deal with all of the things we were experiencing in the Q (quarantine), and I am positive the themes will be easily relatable for our fans, while also presenting a unique perspective. I mean…I moved, changed my career, became a full-time single dad, moved in with my elderly mother, wrote a record, quit drinking, lost 30 pounds. It’s been a helluva year for everyone, and your friendly correspondent is no different.

What do you miss the most about performing in front of a live audience?

But…can you pull it off live?  Even if you use backing tracks and fake your way through it, can you entertain people?  There is always a huge difference between theater and movies, and to me, that edge of danger in a live setting lends an extra touch of tension that can’t be replicated.  I don’t care about live streaming music. That is not my thing and probably will never be. I wanna be live, I wanna see my favorite artists, live, and I wanna do it with 1000 other people next to me, or when I am playing, in front of me.  That elevates the experience and certainly elevates my game as a performer and artist…I need that back.  The new songs and the last album MUST see a stage!

Which of your songs was the hardest to write or compose?

After 50+ songs, you are asking the impossible, my friend!  I guess “Happy Home” from the Little King EP OD1 was the most difficult emotionally.  I was in a front row seat watching the disintegration of my second marriage, and I really felt like it wasn’t my fault and yet I couldn’t do anything.  But I was gonna try, and “trying” meant relocating to Delaware from California to a place I had never been and where I knew no one. That’s thrilling, to an extent, but it’s also remarkably intimidating and not a little bit stupid at age 40.  But I did it and it did me…no surprise to anyone else who knew me.

“Happy Home” tells that story, both musically and lyrically. It’s not a fun song to listen to or play for me, but I do it when I need a stark reminder of where I was and why I am never going back to that dark and chaotic place.

What are some things you wish happened more in today’s music industry?

So glad you asked! Ha ha…

I just got my royalty checks YESTERDAY for our Spotify streams. We have had over 100,000 streams on Spotify, and many many more on Apple Music, YouTube, Deezer, etc. You get the idea.

Sean Parker had an idea that Napster could disrupt the music biz forever. I think he had no idea that the rich would continue to get richer, and artists would continue to be leveraged to their eyeballs. The ONLY way we make money now is by touring (2020 FUCK OFF) or licensing our songs for whatever purpose (what I used to call “Selling Out.”)  There IS NO OTHER WAY.  Especially for a mid-level artist like Little King.

I would like to see this change. Yes, it’s awesome to pay 10 bucks a month to stream any song you want. I get it. I do it. Guilty as charged. But the streaming services need to be held accountable, I think. Are they making a ton of money?  I don’t know. But instead of file sharing and on demand music leveling the playing field and “socializing” the music biz, it has instead become an oligarchy. Sort of. Sound familiar to anyone?

What has truly been the biggest challenge for you to overcome?

On my album Time Extension (1998), my ex wife took a photo of me standing in front of Lake Washington in Bellevue, WA.  We then took that photo and photoshopped 3 symbols in a way that made it look like I was juggling them – Alpha, Omega, Infinity.

The juggling act that has been my life for as long as I have been a recording artist has been a massive challenge. I have Jewish guilt…or half-Jewish guilt, anyway (Maybe not guilty enough?  I feel so guilty about that!)  I can’t fuck off my life just to be a pretend rock star. I have kids who need me, a career and employees/co-owners who rely on me, and a lot of other varied passions like sports and travel and girls (oooops.)

To maintain consistency, or to be consistently inconsistent, as it were, over 23 years has been a challenge.  There have been several 4- or 5-year gaps in releasing albums. The first 2 (Transmountain and Time Extension) were a year apart, and Occam’s Foil (2019) will be about a year old when we release Amuse de Q, so I am working on changing things. But I am very proud to have continued to produce music, and when I look on the wall and see my (soon to be 7) discs hanging there, it is eminently satisfying. But I can’t rest on that…so I keep going.

What’s a quote that motivates you to keep doing what you do?

“Showing up is half the battle.”

How have you been affected by the COVID-19 pandemic?

It made me write songs…and really invest my time into the process of playing complicated riffs and drilling them hard into cohesive compositions. You’ll see!

Having said that, the life-changes have been profound.  I mean, I uprooted and sold virtually everything I own (not my music gear…that stays with me.)  My house, my cars, my motorcycle, my furniture…all of it is gone. I just wanted to be with my son and near my daughter, with my mom, in a place I felt comfortable. Which happens to be 104 degrees today!  But all good.  I have spent a considerable amount of time dealing with quarantine, and it made for great lyrical inspiration. When I quit drinking (the state of Delawhere strongly advised it), I lost 30 pounds and gained clarity that is hard to describe.

So yeah…2020 can eat a bag of you know whats…but I have used it to my advantage as best as possible.

Where have been some of your favorite places to travel?

Circle K. I missed them so…that slushy machine has like 10 flavors now. Insane!