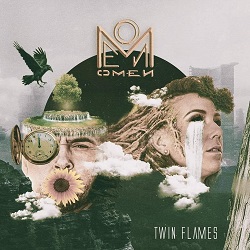 Swirling around us in a haze of a synthetic melody, the fragments of a beautiful harmony suddenly come together to make something quite quaking in the opening bars of “Battlefields,” the lead single and first song in Twin Flames’ new album Omen. Sung to us in multiple languages against a backdrop as multilayered as it is attractive to anyone who loves the ethereal tonality of a post-punk era in pop music, “Battlefields” is the cherry on top of a deliciously decadent folk-rock sundae in Omen, and for those of us who can’t get enough of a quality indie sound when we find it, it’s one of the best records out this year.

“Battlefields” leads us directly into the jagged edge of an otherwise softly-delivered “Pisuppunga.” From the acoustic harmonies of this track, we’re delivered to the crunch of “Outcast,” a song I would definitely describe as being as close to controlled alternative rock chaos as this act has ever allowed themselves to get. The hook is the heartiest of any on the LP, and when coupled with the kind of virtuosic vocals these two can summon whenever they need the extra boost, it makes for a song that should rightly be a single alongside the aforementioned sleeper hit.

“Without Tears” is where the eclecticism in this duo’s style of play begins to take control of the creative direction we’re headed in, ushering forth a lush musicality that will only swell as we explore the progressive heavy rocker “Grace Too” and elegant “Giants.” There’s an artsiness to this record that never fails to take me by surprise no matter how many times I’ve listened to it, and although Twin Flames were already working with a pretty left-of-the-dial kind of a sound prior to this latest trip to the studio, it feels a little more free and unrestrained in this release than it did in their first two LPs.

“Who I Am” feels very much like a precursor to “Follow Me” from a compositional perspective, but I would stop well short of saying that any of the material in Omen would have a hard time standing on its own without the rest of the album there to hold it up. As conceptual as I find “Human,” the title cut and “Shadows,” they could splinter or be rearranged in this LP and still hold plenty of water with the listeners – it’s only when they’re consumed back to back, though, that we’re able to really get a sense of how theatrical Twin Flames want to be in their music at the moment.

Omen concludes with a lingering cloud of smoke in the chills-inducing “Giants (Reprise),” leaving behind it a trail of atmospheric melodies and poetry as in touch with the Canadian experience as it is the nature of humanity in a post-industrial age removed from natural emotions. Too expansive to be a run of the mill pop effort but not so sophisticated it deters the casual passerby, this latest record from Twin Flames is everything this critic would want in an iconic Canadian indie LP and then some.

User Rating: Be the first one !
Share
Previous LITTLE KING
Next Musik and Film Delivers World Wide Radio Promotion, and So Much More…