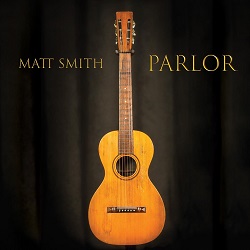 Quaint and simple with us in “29th St Rag,” furious in his melding of tense melodic ribbonry in “Traveling Man” and alive with gentle decadence in “After the Goldrush,” Matt Smith isn’t afraid to explore every corner of his skillset in the new album Parlor, one of eight new records he’s releasing in 2020. There are blue hues to behold in “Blues in the Parlor,” aching harmonics in “Slacker” and self-explanatory swing in “Spring in My Step.”

Bouncy beats find a home in the humble string play of “Dressing for Church” much as they do “Isla Mujeres” and the surreal “Daydreams.” In Parlor, Smith is determined to explore tonality through the time machine that is a family-kept, 19th century parlor guitar, and although much of the content here is improvised – composed literally on the fly amidst an ongoing jam session – there’s never an instance in which our leading man sounds unsure of himself or the creative direction he’s taking. There’s a lot of confidence to his execution, but more importantly, a natural talent that binds together all of the material regardless of stylistic origin.

There’s a lot of color to the melodies in “Blue as Blue Can Be,” “Desert Meditation” and even the subtle epilogue “That’s All Folks!,” to such an extent that I think it works to assert just how virtuosic a style of play Smith is showing off here. I absolutely can’t get enough of the tension we encounter close to the end of the record in “Traveling Man,” as it essentially warms the audience up for the undying catharsis that comes undone by the time “Isla Mujeres” sweeps us off our feet. When a mood is utilized with the efficiency this player employs in Parlor, you end up with an LP that goes above and beyond the standard for what an instrumental record is supposed to convey.

For being a drum-free effort, there’s plenty of swinging grooves throughout tracks like “Blues in the Parlor” to keep us as enamored with the upbeat tempos as we are the brooding, slow-rollers like “First Love,” and in its entirety, I wouldn’t say there’s much ground the music fails to cover from an emotional standpoint. If you listen closely, humanity itself is reflected in these tracks – love, depression, angst, elation and even retrospection – which is something a lot of artists try to do but so few actually pull off.

Both a robust tribute to six-string melodicism at its most materially unfanciful and an amazingly immersive listening experience for anyone who enjoys acoustic sophistications, Matt Smith’s Parlor is one of my favorite instrumental albums of the year. This record works as ambiance or as a piece you can really get lost in, and though it isn’t the only LP that Smith is releasing in 2020 worth taking a peek at, I would have to say it’s probably the most elaborate from an aesthetical point of view. It’s conceptually minimalistic without dispute, but nevertheless an album that somehow plays out not unlike a full-blown symphony.