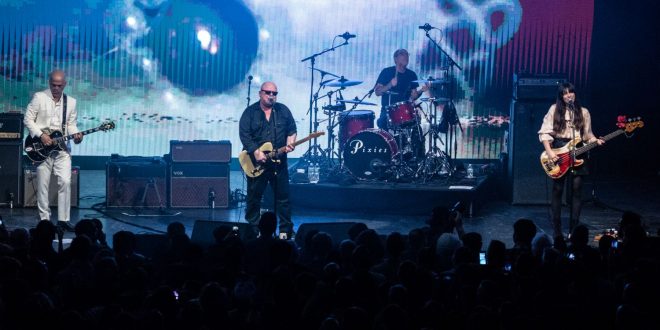 The Pixies live In Brooklyn – 20NOV18

The Pixies‘ early works were essential contributions to the late ’80s / early ’90s alternative rock revolution, influencing Kurt Cobain, among others. Come on Pilgrim, their 1987 debut EP, and Surfer Rosa, their 1988 full-length debut, set the foundation for what would initially become a legendary but brief career. The band broke up in 1993 as a cult favorite, despite a library of incredible songs that should have placed them in the stratosphere of the biggest alternative rock acts of the day. They wouldn’t really see large-scale audiences until they reunited in 2004, headlining major festivals and selling out arenas and amphitheaters.

With the Pixies playing the third show of a three-night stand at Brooklyn Steel on Tuesday night (November 20th), there wasn’t much mystery in the setlist, with these gigs serving as a celebration of Come on Pilgrim and Surfer Rosa, both collected on a recently released deluxe box set titled Come On Pilgrim … It’s Surfer Rosa. We knew we were going to get the complete EP and album, as well as some rare B-sides during the main set, with the only surprises left for the encore.

There was no opening act, but prior to the Pixies’ set, a short movie was shown — an avant-garde film documenting the stunning artwork of both Come on Pilgrim and Surfer Rosa — setting the stage for the Pixies to present the music.

Frontman Black Francis, guitarist Joey Santiago, drummer Dave Lovering, and bassist Paz Lenchantin got to work on Come on Pilgrim right away, starting with the leadoff track “Caribou”, mostly appearing in silhouette during the heavily backlit first song. And while the band proceeded to perform the entire EP in order of its tracklist, they didn’t try to replicate the work note for note, offering up varying arrangements of the songs, with “Nimrod’s Son” and “Levitate Me” among the highlights. Along with the music, each song had its own custom graphics projected on the screens behind the stage.

Lenchantin then let the audience know that the band would be performing a series of B-sides, and that’s exactly what they did, playing songs like “Down to the Well”, “Dancing the Manta Ray”, and the haunting “In Heaven”.

Then, a graphic for Surfer Rosa popped up on the screen, signaling the evening’s main event. If Doolittle is the Pixies’ masterpiece, then Surfer Rosa is a close second. Front to back, the band’s debut full-length album is filled with intensity, beauty, heaviness, humor, anger, and more. Starting off with “Bone Machine”, Francis and company delivered the album front to back, complete with recreating the fun dialogue moments that are sprinkled throughout the disc.

The band has been minus original bassist Kim Deal since 2013, but they’ve found a stellar replacement in Lenchantin. Not only is the onetime A Perfect Circle member a great bass player, her vocals absolutely shined on “Gigantic”, and complemented Francis’ anguished scream on songs like “Break My Body” and “Broken Face”.

The centerpiece of the Surfer Rosa portion of the evening came with the first notes of “Where Is My Mind?”, one of the great rock songs of all time. Already quite ethereal in nature, the track echoed throughout Brooklyn Steel with a celestial majesty, a true highlight of an exceptional night of music.

After ending the Surfer Rosa portion of the set with album-closer “Brick Is Red”, the band members all came up to the front of the stage to take a group bow, playfully debating whether to stick around and play a few more songs. Luckily for fans in attendance, the Pixies treated the audience to quite an encore, ripping through the Doolittle classic “Debaser”, their cover of The Jesus and Mary Chain’s “Head On,” and another Doolittlefavorite, “Tame”.

While the Brooklyn shows marked the end of Pixies’ 2018 tour itinerary, the band will be back on the road in the spring, co-headlining arenas with Weezer on a North American trek. See a full list of dates here.