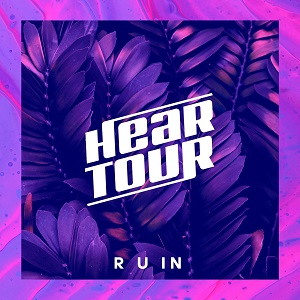 “Brain” opens Heartour’s fifth album R U In and, based on its vigorous nature, it comes off as a statement of purpose for the project’s new release. Heartour’s musical identity leans heavily on a varied electronic sound; some may decry the limits of electronic music, but Jason Young’s songwriting shows that such assumptions are erroneous. Despite the fierce musical attack of the album opener, it doesn’t have any heavy-handed characteristics and Young’s vocals compliment the music in superb fashion. The album’s second cut “Refill the Fountain” shares the same urgency present in the opening performance and rates for me as the most intensely physical track recorded for R U In in. He pulls from a seemingly bottomless bag of musical invention and weaves the disparate electronic strands into a colorful and coherent stand of performance art. It is, like the album as a whole, simultaneously entertaining and aesthetically satisfying.

It is never pronounced but there is a theatrical quality present in these tracks as well. It comes through particularly well in the album’s third song “Let the Robots Drive” thanks to its persistent scattered pulse and the dynamic rise and fall of the arrangement’s intensity. It comes across, as well, in the vocal treatment. Young uses a judicious amount of effects on her voice to add dramatic emphasis to his vocal parts but his artistic sensibilities prevent him from ever going too far with those post-production touches. The natural timber of his singing voice emerges in each of R U In’s ten songs. It’s indicative, as well, of another side of Heartour’s musical character that provides a needed shift in gears rather than constantly attempting to wow listeners with a battery of amped up electronic instruments..

“As Far As We Go” has a steady press from near the beginning without ever cluttering the track. It is one of Young’s more convincing vocals and continues making creative use of effects to increase the atmospherics of his singing performances, It is one of the stronger performances included on R U In. The vocal arrangement for “Eye on the Ball” is one of its merits thanks to the airy heights he reaches and the pulsing musical accompaniment is a perfect fit for Young’s voice on this performance. The strongest late track on R U In is, without question, “The Persuadable One”, the most action packed number coming near the album’s end. Young brings plenty of oomph to bear during this performance and its placement near the album’s close is a masterful decision.

“Dear Future”, the second to last cut, has an effervescent musical lift that links up well with Young’s vocal and, in particular, his lyrics for the song. It pairs up well with the finale “Baby Spiders” though they have distinctly different lyrical points of view. The latter is closer to being outright phantasmagorical and the imagery has a slightly unsettling air at odds with the comparatively light touch of the music. It’s a skillful way to end the release and puts an exclamation point on Heartour’s best release yet.