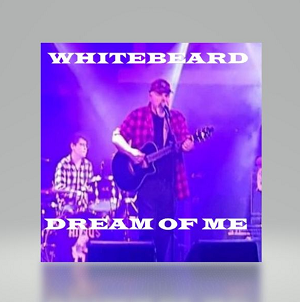 Whitebeard “Dream of Me” (SINGLE)

Swinging as hard as some kind of heavenly pendulum, Whitebeard wastes no time in hypnotizing us with a lush rhythm as his new single “Dream of Me” begins to fill the air around us. There’s a sense of ease that comes pouring out of the speakers in the moments that immediately follow pressing the play button on this song, and it’s one that anyone feeling a little cooped up from the international quarantine could especially use this spring. Building on the experimental nature of his last album, 2019’s Plaid Is the New Black, Whitebeard’s latest single sees him embracing eccentric songcraft with a furious passion (and yielding quite inspirational results in the process). In this last track recorded with his late son and drummer, the acclaimed singer/songwriter strings together bittersweet harmonies and smart lyricism handily here, as well as in the music video for “Dream of Me,” without ever translating as egocentric or self-righteous. As I see it, Whitebeard has a lot to be proud of with the release of this single, and moreover, the career he’s created for himself thus far.

“Dream of Me” is supremely groove-oriented, but I wouldn’t say that the beats are the lone gem to be enjoyed in this mix. There’s a robust physicality to the guitar parts in this track that I haven’t been able to shake since first sitting down with it just a week ago, and while their beefiness isn’t a new feature in Whitebeard’s music, they fit this setting particularly well. Our leading man’s vocal is warm and balances out the mild contrast in depth between the percussion and the strings beautifully.

Though these are some of the more simplistic lyrics he’s committed to master tape so far, I wouldn’t say they’re limited in their poetic scope at all – the opposite, truth be told. Whitebeard didn’t need to overthink the narrative in “Dream of Me,” and in keeping things as black and white as possible, he altogether avoids a lot of the overindulgent hazards that his peers have been struggling with as of late. He knows what he’s doing, and that’s more than clear when breaking down this song.

I’ve admittedly been a fan of Whitebeard for a few years now, and I must say that he’s getting better with each release I review. The development in his approach to lyricism alone is something worth writing home about this spring, and while he’s facing plenty of stiff composition on both sides of the Canadian-American border at the moment, he’s bringing his A-game to the studio he re without a doubt. “Dream of Me” is a startlingly balladic look into his artistry, and while I’d stop short of calling it a slow song, it exhibits elements from within his music that I would love to hear him explore just a little further in the future. His 2020 is off to a great start, and it will definitely be interesting to see how he works off of the success this latest single/video combo brings his brand.