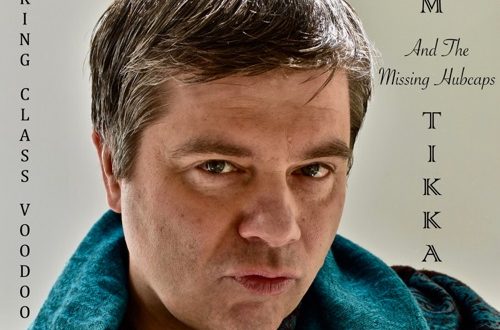 Tom Tikka and the Missing Hubcaps’ EP Working Class Voodoo is an unexpected development in the career trajectory of Finnish singer/songwriter/musician Tom Tikka. The three song collection provides listeners with an unique take on the singular songwriting talent that helped make the now defunct Carmen Gray and his other project The Impersonators among the most compelling recording acts working in the modern music. If that seems like steep praise, it is deserved. This brief collection hits harder than you’d expect despite only featuring a trio of songs and never feels or sounds like a throwaway effort. There’s clear care taken in nailing these songs down for listeners and capturing these essence rather ornamenting them with cheap tinsel. These are three songs capable of lingering in your memory.

There are strong understated melodies underpinning both the vocals and musical arrangement. The guitar work has a light boisterous edge giving it an added shot of energy without pressing the issue too much. Tikka and the Missing Hubcaps come off s a fully realized outfit; the rhythm section, particularly the drumming, creates a memorable groove for the song and the entirety of the track sustains a relaxed swing. The production renders these elements with crystal clarity and the balance between the song’s instruments is uncluttered.

The same searching spirit that set Tom Tikka on this road years ago remains as strong as ever. “Working Class Voodoo” bristles with sparks and audible inspiration; it never gets carried away with itself but you can hear Tikka’s joy in performing come through from the first notes onward. It accumulates momentum as the track unfolds and will leave many listeners wanting more when the cut comes to an end. It’s as well-honed a piece of rock music as you’ll have heard in recent memory; Tom Tikka and the Missing Hubcaps never need to scream or beat on their figurative chests to make their point musically. Instead, they need to plug in and turn the amplifiers on. The rest falls into place

“Daytime Suffering” is a worthwhile successor to that stunning opener. Tikka uses this song as a vehicle to dust off some of his lead guitar chops for listeners and it’s never waste of our time. His playing always makes sense within the context of the song and never spins off into freewheeling tangents. The lyrics strike a much different note in substance and tone from the opening track, but a careful listen reveals they hail from the same sensibility. He attempts using harmony vocals once again here, in an even bigger way than the opener, but they fall a little flat in comparison. Tom Tikka and the Missing Hubcaps have forged a startling little gem of a release from these three songs and it’s easy to envision each of them soon becoming mainstays in Tikka’s live performances for the foreseeable future. Working Class Voodoo is the sort of release aimed towards translating well over to the stage and invites repeated listens; it is that good. .

Share
Previous Whitebeard “Dream of Me” (SINGLE)
Next MATT WELSH