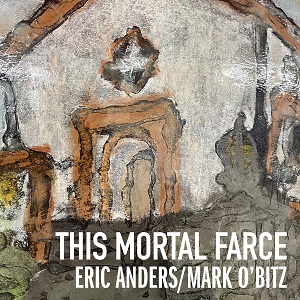 Anders/O’Bitz – This Mortal Farce EP, is their second release in 2020 (after the recent American Bardo album), and it comes with four marvelous numbers worth adding to any current library, playlist or however you select these days, as this duo hope listeners do without any fuss and bother between so many ways to hear the music now. I have read up enough on Eric Anders and mark O’Bitz to know that much and a little more, but that’s still coming from an outsider perspective about a band that hasn’t been playing live but records and releases plenty of contemporary music without forgetting their influences which cross several genres.

The Americana sound is written all over the EP, but there is more to it than meets the ears, because if you were to take rock, country, singer/songwriter and other rootsy elements, Americana is essentially what you get. But This Mortal Farce kicks off with its most eclectic track – “There’s No Changin’,” and it almost threw me off after catching up on them before listening to the EP, because it is a less straight forward song but I only found that out after blasting all four tracks on the headphones. My general opinion of it is, the track is epic.

After getting knocked out by the first track, I recall pondering where the EP would go, and it defied my expectation of it staying in the same exact groove as the previous track but I was happy to hear that as well. I am not one for no variety from track to track, I more often demand it than not. “Comes And Goes” is an all out inspiring and totally difference experience as I was saying, and it’s probably my favorite track on This Mortal Farce, if I were to asses them one by one, but not necessarily the best track on it either.

You can hear how well these two artists lock in together and instrumentally intertwine behind the somber vocals, which are the focal point of these songs and likely key to the magnificent songwriting skills on display. “Old Eyes” keeps the EP grounded with a most lovely acoustic track that simply does not quit, as it plays long but with enormous satisfaction you can always use another two or three plays of before it is over. This is one of those songs you want to keep it on loop for continuous spins.

The EP closes with what is a slightly more depressing effort but also brings these tracks to a proper close with the lyrics getting down to the nitty gritty about what there is to be seen through the mind of Anders’ and “Seen So Much” is the cringing result as this brooding ballad sinks in and makes to wonder and ponder your own thoughts and visions, and that ultimately helps define This Mortal Farce and get the point across to anyone looking at music during the 2020 pandemic to help inspire and move forward with this duo’s musical breaths of fresh air.

Share
Previous “Everybody But Myself” by Rad Horror
Next BORN ANIMAL