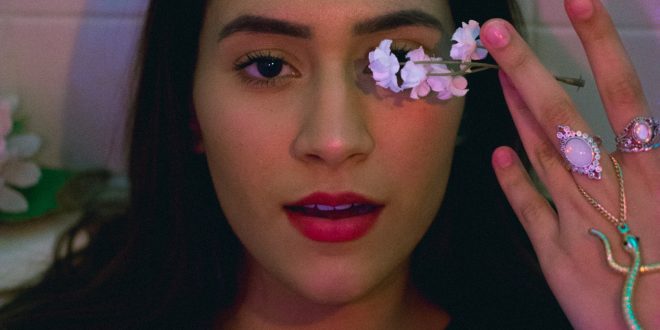 “Cigarette” mesmerized me with a single hearing. Having no experience of Ashley Delima’s talents before hearing this song, I immediately searched out some information about her and versed myself with her previous work. This new performer on the pop scene has a previous single, “Stay in America”, to her credit already that pushed listeners to consider the very human and heartbreaking fate of immigrants who continue to pursue the long tradition of entering the United States to pursue a better life for themselves and their loved ones. It’s a fantastic effort you should seek out if you haven’t heard it. “Cigarette” exponentially advances the promise of that first effort with a song that goes even deeper under Delima’s skin and shows the same unflinching willingness to confront difficult topics with an inner strength that left me breathless.

Her talents left me equally breathless. Delima, hands down, is one of the most rewarding new vocal talents I’ve heard in recent years and her singing gives the track intimacy far beyond the yen of your typical pop performer. She steers each line of the song with heart-bearing audaciousness and her songwriting with producer Marc Swersky, Alex DeMaio, and renowned tunesmith Brielle Brown connects with you on a gut punch level while also reaching incredibly eloquent heights. Few songs you’ll hear in modern music possess the inventive language and turns of phrase you’ll hear with “Cigarette”. The song has a plethora of metaphors, one seamlessly melding into another, and resulting in a totally fleshed out personal experience that will leave you wondering just how far this amazing talent can go within, yet still reach out and communicate with listeners.

The video released alongside the single is a visual feast further explicating the song’s themes. Filmed with a clear eye for color, almost painterly at times, it further defines the non-linear narrative of a singer exploring her feelings about a destructive romantic relationship and fuses passion with a sense of knowing how much this connection can damage her heart. Delima is joined for this performance by guest hip hop vocalist $tandard and the chemistry they display together during the second half of the tune would likely translate to the stage with enormous impact, but the studio has captured that as well.

It’s a musical feast as well. Delima’s accompaniment mixes live and programmed instruments alike in a striking blend that grabs your attention and never lets go, but I particularly enjoyed the acoustic guitar laced throughout the song’s entirety. It brings musicality and melodic sophistication to an already first rate track and never tries to compete with Delima’s voice. Instead, I feel and hear how it shares the same emotional connection with the material and is clearly the product of musicians who knowingly play to the song’s strengths without a hint of ego or showmanship heard. Ashley Delima’s “Cigarette” is the next step in a blossoming career that seems capable of going anywhere and following her trajectory will undoubtedly prove to be one of the more compelling stories of the modern music world.