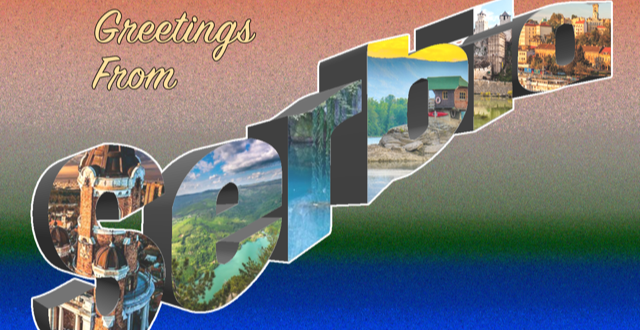 The latest release from the Robert Miller led Project Grand Slam, Greetings from Serbia, is an attractively packaged seventh recording from this self described jazz rock fusion six piece. Miller, one of the best bass players you will ever here, took his band mates with him to play the famous Nišville Jazz Festival, a hotbed for virtuoso playing, and lights the audience on fire with a ten song set collected here. He’s surrounded himself with a great singer, Ziarra Washington, and four other top flight musicians who we’ll later discuss in this review. This is music that celebrates life, creativity, and the sense of community created by musical art. It comes roaring out of the gate and clearly charges its audience with its fiery, but never gratuitous, pyrotechnics.

The set opener, “You Started Something”, is our introduction to Washington’s talents on this release and she commands audience attention with her impassioned vocals. Mario Castro’s sax work provides an important and upbeat complementary “voice” to Washington’s own and the effortless bounce of the rhythm section, Miller’s percolating bass and drummer Joel E. Mateo, keep things hopping. The brass and Washington’s wailing voice gives a very distinct twist to the band’s cover of the Cream classic “I’m So Glad”, but guitarist Tristan Clark makes his presence felt on a song whose original guitarist, Eric Clapton, certainly doesn’t rank as any slouch.

Mateo’s drumming and the slightly melancholic tone of Castro’s saxophone show off a different face of the band with the track “Lament”. Washington’s singing is full of jaw-dropping longing, but a true highlight for me comes with the song’s gradual second half transition into a Tristan Clark showcase with his soloing skills. Nothing he ever does, however, comes at expense of the song. There’s some fleet and beautifully melodic guitar playing from Clark opening “Free” and keyboardist Baden Govo provides some key contributions throughout enhancing the overall color. It’s an intelligent track, as they all are, but there’s some particularly emotional about the way Washington’s voice contends with this song and her voice is positively amazing at critical points in the performance.

“Gorilla” is a brisk instrumental with rock leanings – the band hits some assertive flourishes throughout the course of the song and Miller drops in some great bass fills. Another peak on Greetings from Serbia comes with the track “I Can’t Explain” and the band’s obvious love for and understanding of classic songs allows them to transform these tracks into jumping off points for their own imagination. Washington’s vocals are, once again, all killer and no filler. Newcomers to the band will be dazzled by their original track “The Queen’s Carnival”, another instrumental finding them turning their ears and hearts to a joyous Latin music tribute. They sound comfortable with the style and play with the same confidence defining every previous effort. The closer “Fire” looks back to the past while keeping their feet planted in the present as Project Grand Slam tackles Jimi Hendrix with a cover that, undoubtedly, would have pleased the guitar master. You can’t go wrong with Project Grand Slam’s Greetings from Serbia.