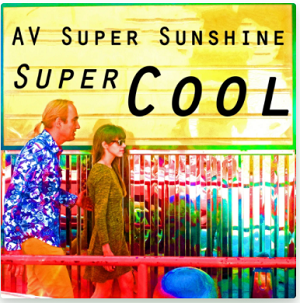 How do we define what is cool in 2021? AV Super Sunshine has an answer to that question, and he’s ready to share it with the World. AV’s new single, “Super Cool” is as figurative as it sounds, but he seems to be at least somewhat, literal. One could argue, that in today’s society, being cool is intentionally antithetical to anything it has ever meant, before. So in AV Sunshine’s case, it’s refreshing to hear him approach the subject so casually.

“Super Cool” is a concerted effort to visualize the latter half of its adjectives. It’s a stylistic, and idiosyncratic piece, that doesn’t take itself too seriously. Boasting an electronic backdrop, it’s hard to give the genre treatment to “Super Cool” or even more specifically, AV Super Sunshine. Digging into some of the artist’s earlier work, you get a sense of a mercurial style. “Super Cool” is a notable addition to AV’s variegated catalog.

You could potentially release “Super Cool” in any of the previous three decades, and it wouldn’t seem out of place. AV’s influences seem to span generations, and it’s often reflected in their offerings.Their body of work, seems part experimentation, part visionary. AV Super Sunshine seems to stop just short of being Avant Garde, by managing to stay above ground, so to speak. This is a piece that would be a Great fit for Cartoon Network’s, Adult Swim.

“Super Cool” is purportedly  AV’s answer to being marginalized and disenfranchised. It uses the school setting and the classroom as a metaphor, for where being cool is of its greatest importance. AV Super Sunshine is the tall kid in the back of the classroom, who seems simultaneously overlooked, and irresistibly gaudy all at once. The Song is catchy, and some of that is attributed to repetition. The word cool is used often enough, and with a characteristic flutter, that it can almost qualify as subliminal advertising.

“Super Cool” certainly evokes the cool factor. It’s ambient, danceable, and sonic. It Succeeds in transporting you into the setting described in the lyrics. Some might find it to be a bit cheeky, but I think that’s part of it’s charm. AV seems self-aware and completely oblivious, all at once. Cool is a state of mind, and AV Super Sunshine seems to grasp that.

I’m not sure that I completely buy into the notion that Electronic style Music alienates certain audiences. I think there are examples of technology holding court in pop music, all the way back to the 60’s. AV Sunshine recognized that if you are going to call a Song, “Super Cool” it HAS to fall into the genre of electronica. With the exception of R & B, or maybe Motown, it’s the only style that can capture the level of swagger,and self-assuredness of such a title. I think it deserves to be said that listening to “Super Cool” might just Succeed in making you believe it, and maybe in yourself.