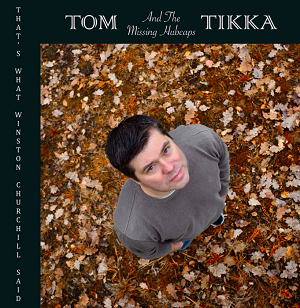 Have you ever found something you wrote a long time ago and thought “oh man, this is not good” and no longer indicative of who you are as a person? Tom Tikka can’t relate with the debut of his masterful EP That’s What Winston Churchill Said. Across six tracks written over the course of his life, Tikka has obviously long carried a knack for powerful punch-to-the-guy lyrics and each song almost feels better than the last. Almost. I’ll get it out of the way right now and say, the ending track “A Good Thing Going On” is a confusing addition. I’d really like to know what songs may have been cut for it to earn its spot as the closer, and I can cut it some slack because it was written when Tikka was a teenager, raising hell and having fun with his brother and father.

The sense of playful youth is palpable, but it’s also a far cry from the insanely captivating opener “Turn Back the Time” where Tikka details his desire to divorce his wife and escape from an unhappy marriage. That song pulls no punches and it’s almost the musical equivalent of Netflix’s Marriage Story in terms of how ugly it can get sometimes lyrically with things like “I wish I never made you mine” and “If I could whitewash my mind.” It’s a truly haunting start so you can imagine how jarring it is when you get to the end. Some may find its content a little too dark, but it’s offset with such a playful energy it never feels punishing.

I think now thinking about it, the album could have benefitted from a general reworking of track placement. Taken on their own they’re all wildly effective, but the second track “All She Wants is You” is about a failed relationship ruined by infidelity, but its perspective comes across as young, romanticized and maybe a little too naive. It’s not childish, but it was written by a younger man and it may have held more impact to be introduced earlier and work its way towards an inevitable darker ending. Sonically Tikka reminds me a bit of REM with his slick production combining smooth electric guitars with distinct flairs that are never repeated track to track just adding to the EPs re-listenability.

Tikka crafts fully fleshed out worlds such as on the track “Mary Mattered” which comes across as a missing pop-punk classic that wouldn’t be out of place on the radio alongside “Stacy’s Mom.” The momentum on each of his songs never lets up and the climaxes range from bombastic to haunting with lingering echos and peaceful harmonies depending on the track. The titular track “That’s What Winston Churchill Said” is a nihilistic jam that feels very in place with the 2020 echoes of rampant ennui and disappointment with Tikka struggling to find meaning in a world that feels like it’s often forgotten about you, or just straight up doesn’t care.  Each track carries a distinct 90s sound and flare, but has a timeless relevancy to it.