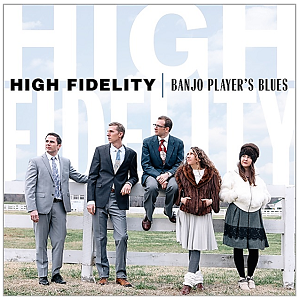 On the back of a blushing fiddle’s leading melody, listeners are prone to getting lost in the strut of “The Picture on the Wall” right out of the gate when examining the new album from High Fidelity, Banjo Player’s Blues. Though not the firecracker of an instrumental that “Turkey in the Straw” is, “The Picture on the Wall” is just as riddled with sonic vitality as any of the songs it neighbors in the tracklist of Banjo Player’s Blues this June 20th are. The title cut is definitely on the mathier side of the bluegrass spectrum, but as is the case with the tempered “Tears of Regret,” the tone of its harmonies often conveys more than the actual adrenaline of the play does. It takes a devoted musician to give the old school swing of these tracks the kind of intrigue and panache it takes to make music exciting to a millennial audience, but thankfully this band is made up of players who can do exactly that and more. High Fidelity are on a mission to keep the bluegrass spirit alive, and in their new LP they give us every reason to believe in the genre’s relevance in this new age.

“Dear God” welcomes us into the elegant sway of the strings before settling into a decadent harmony constructed around vocals even more velvety than those in “His Charming Love.” It’s an interesting segue from the title cut into the instrumental “Feudin’ Banjos,” but in general I think Banjo Player’s Blues benefits tremendously from the flow of its tracklist. Because of the layered style of the music, and moreover, the specific pattern in which the songs have been arranged for us here, it isn’t difficult to simply hit play, lean back and enjoy the entirety of the LP as it was intended to be consumed.

I honestly can’t recall the last time that I was able to say as much about a new country album, but as anyone who knows the two genres is more than aware of by now, comparing the contemporary bluegrass pulse with that of the Nashville establishment isn’t very fair to the latter party at all.

Even in somewhat barebones compositions like “Old Home Place” and “Helen,” High Fidelity come up with some unique ways of getting our attention – and keeping it – in Banjo Player’s Blues. Juggernauts like “The South Bound Train” mesh startlingly well with down-home swingers like “Take My Ring From Your Finger” and “Get a Little Light” here, with very few instances of aesthetical confusion making contact with the audience. I’m a pretty picky fan and critic when it comes to this kind of music, but with a band like High Fidelity riding as large and in charge as they are in this most recent affair, it’s hard to resist the mightily melodic sound they’re offering in Banjo Player’s Blues. I like what I’m hearing in this LP, and if it’s what I can expect to get out of their future work, I’ll absolutely be reviewing their content again.

User Rating: Be the first one !
Share
Previous Tim Brandt’s Long Walk Home (LP)
Next Songs from Inside (LP) by The Impresario (Valerian Ruminski)