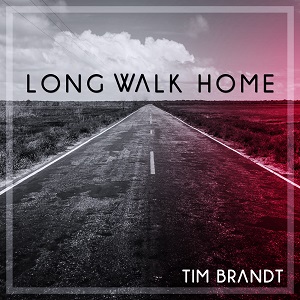 New York City never ceases to possess some of the most interesting and exciting musical artists. For a city thriving with all sounds and all genres, one singer/songwriter just on the outskirts of NYC is slowing things down and keeping things trim. Tim Brandt’s Long Walk Home, is an Americana, folk pop/rock salvation. Each track is a thread to Brandt’s carefully shared memory mementos.

Long Walk Home is Brandt’s second independently released album. His previous effort came in 2007 with My Inner Child. He recorded My Inner Child in Seattle, Washington, but has since moved back home. Much of the lyrical themes on Long Walk Home deal with the move, and as his lyrics show, he’s assured himself that home is certainly where the heart is and where’s he’s meant to be.

Along the sonic journey the listener gets to hear Brandt’s superb guitar playing skills. All his songs have tremendous guitar melodies and music beds cemented with harmonious movement. His voice is unfiltered, touched by years of experience and threaded with grit and rapport. Brandt’s true self comes out in his words, not his voice. Some of the stronger songs on Long Walk Home happen to fall into the first half of the album’s nine songs. The title song’s music base is like something from the 60s- folk flavoring. The percussion is steady, giving added bumps to the already wonderful guitar melody and tone. Brandt sings “onward, onward, all roads lead us back to home.” The next track, “There And Back Again” is my favorite on the album. It reminded me something that might be from The Kinks’ catalog. The guitar has bright spots, as it trickles alongside Brandt’s modest voice. “I went there and back again, been 15 years my friend, cross the desert to the sea, it is always you and me,” he sings. He’s so personal and likable. He just puts you at ease with his lyrics, and his guitar playing hugs your heart.

“Love Is On Your Side” is track three. “Let your thoughts come to another time, once upon a time…don’t worry about what they think inside…they can never break your pride,” he sings, echoing years of insecurity we all have felt. It’s like a trigger, a rewind to times that your feelings were hurt, or too embarrassed to admit, you heart someone else’s feelings.

Track four, “Next To Me” is heartbreaking. Brandt sings “I reach for you, oh, I reach for you” and the pain is palpable. His voice doesn’t crack, or race. Rather, he continues his words with an almost shy delivery, still chiseled with shreds from a life lived. “Next To Me” is a powerful song. One of the songs that seem to be out-of-left-field, but undeniably entertaining is “Philadelphia”. What a fun song! “Philly fans are nasty, they’ll tell you how they feel, they’ll eat you up and spit you out,” Brandt sings. This song yearns to be sung loud and amongst a large gathering. Brandt’s making his mark, even in one of the toughest cities to play in America.