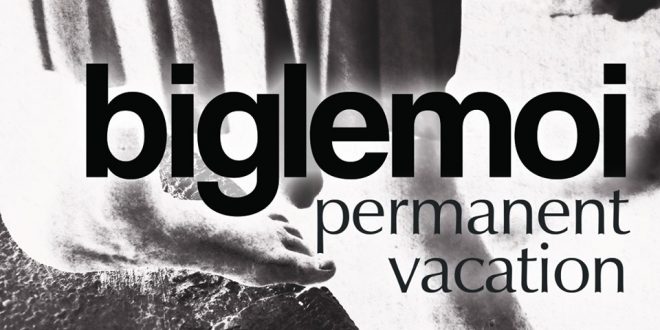 The guitars that act as a linchpin for the deeply diverse and multifaceted extended play that is Biglemoi’s Permanent Vacation are effervescent in “Decipher,” cerebral in the title track, pumped up with a youthful moxie in “Joyride,” stony and surreal in “Other Side,” and emotionally paralyzing in “Sola.” Each of these songs serves to show us a different layer of Biglemoi’s sound, but they all have one thing in common – unadulterated six-string worship. Even the piano-led “Sola” bears a screaming electric axe as its centerpiece, and for guitar enthusiasts like myself, Permanent Vacation adds up to being one of the premier releases of the summer.

There’s a lot of tension in “Sola” and the title track, but by the time that we get into the reckless abandon of “Decipher,” the cathartic bursts of adrenaline are able to balance out the more pressurized moments in the record. I get the idea that Biglemoi structured this tracklist as to lead us through movements of their music, much like a classical composer would a symphony, but unlike some of the similarly ambitious efforts that we’ve seen out of their contemporaries both in and outside of the south, theirs isn’t faceted in predictably campy themes at all.

The EQ on the vocal could have used a little more of a scooped kick in the title track and “Other Side,” but I think I can understand why Biglemoi decided to go with what they did in these two songs. This group has never been one to follow a trend, and in that spirit, they’re distinguishing themselves from the mainstream in Permanent Vacation by keeping the instrumental portion of the music at the forefront of the mix, with lyrical content lying beneath the surface of layered, often psychedelic-style melodies. There’s no room for bells and whistles in this disc – the material has enough gloss without any additional embellishments.

“Decipher” and “Joyride” are definitely the most experimental efforts that Biglemoi have ever committed to master tape, and I like what they say about the direction of the band looking ahead of 2019. There’s no rulebook that these guys are following, no scene politics nor any silly genre ethos that they take seriously enough to restrain their creativity. The liberal aesthetic in their grooves, and more importantly, their colorful riffing, is going to take their sound to the next level, and I doubt that I’m the only critic saying as much this July.

If you’re sick of the status quo and have been searching for something that goes against the grain of mainstream alternative rock, you don’t need to look any further than Biglemoi’sPermanent Vacation this summer, which clocks in at only 22 minutes but has the feel of an anthology album just the same. It’s not a perfect record by any means, but with regards to what it’s debuting against this season, it’s certainly near the top of its class cosmetically. I’m eager to see how they expand on this sound in the future, but for now, this is a great go-to EP for fans both new and old.

User Rating: Be the first one !
Share
Previous Caracol release Flooded Field
Next “Where We Begin (Radio Edit)” by Fenix & SM1LO