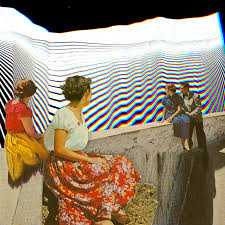 Caracol’s 2018 album Symbolism undoubtedly bears much fruit, but it is my humble estimation that the single “Flooded Field” might be the sweetest yield of her talents included on that release. It is difficult to imagine there’s much better from this artist. The concise yet dynamic track does an excellent job of revisiting the influences defining her musical output since she first emerged on the scene near the end of the century’s first decade and demonstrate how she continues to refine and evolve her ambition deep into a successful career. She has earned considerable acclaim and success on the basis of an award nominated and winning back catalog and “Flooded Field” is worthy of bearing her imprimatur.

The track begins with a slow evolution. The atmospheric electronic leanings of the introduction are laced with piano, multi tracked and massed vocals, before it transitions into an enjoyable reggae bounce. Evidence of this part of the song’s sonic identity exists throughout the whole song but its strongest manifestation comes early on in the track. The piano and vocals aren’t the only live instruments I hear during the recording; there are occasional splashes of live guitar as well punctuating a couple of key points in the track.

I think the lyrics are a little underdeveloped but what is here does leave a mark on you. Caracol has a keen eye for significant detail and a telling image without ever belaboring what she is trying to say. Guest vocalist rapper Illa J’s appearance in the song puts an admittedly different spin on the performance, but it is too brief and, anyway, doesn’t really add much to the overall song except widening its appealing for the modern listening public. This isn’t necessarily a fault, but Illa J’s obvious talents could have potentially been incorporated into the song with more fruitful results.

Caracol’s own vocals are a wonder. She explores a variety of tones throughout the track and the emotive trajectory she follows has a coherence that enhances the track. She gives the lyrics the kind of vocal treatment that brings them to vivid life for listeners and this, if nothing else, is reason enough to recommend the song for music fans. “Flooded Field” is a good representative of Symbolism and should do a lot to draw listeners into the album’s enchanted web. It is one of the better songs in this vein I’ve yet to hear in 2019.