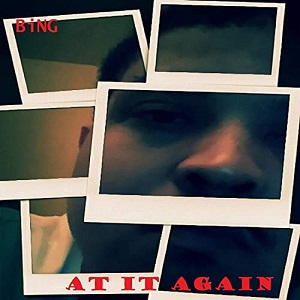 The first word that comes to mind, when listening to Bing’s “Heat” is, different. While the track may have that self-produced, Hip Hop quality to it, it ultimately has that intangible that sets it apart. It’s not perfect, nor is it even perfectly imperfect.  “Heat” is real and it’s unfiltered. Though, Bing may use a few special effects, he mostly comes across as a very real and spiritually chiseled artist.

Refined is a term that many may use to describe not only Texas, but the South in general. There is an almost religious commitment to a life of simplicity in that region, and a bleeding heart is often a prerequisite as well. The types of artists that TX typically produces are brimming with passion, with a tell it like it is philosophy.

You can look at Rock Bands such as Pantera or Drowning Pool, or Rappers such as Travis Scott, and see such emotional intensity, as well as a pledge to honesty. Having spent a great deal of time in TX and Houston, specifically, I can tell you that no artist or musician I have met from that region, does anything at half speed.

Bing embodies all of these aforementioned tributes, and he virtually does it with one track. “Heat” is a well-conceived piece. You can clearly hear what Bing is going for, and the energy is there, literally from the intro. You can hear the Rapper’s talent, instantly, and it’s obvious how much passion goes into his work. At the same time, his humility comes through the speakers, in what can only be described as grit.

By his own admission, Bing once led a “by the sword,” lifestyle, so to speak. His music doesn’t so much have a grim distinction, as a result, but it does have a cultural and milieu awareness. Bing doesn’t reject his past, but he doesn’t celebrate it, either. He indirectly points to his music as the resolution that gave him purpose, and uses his experiences to tell stories and reflect the realities that many are still subjected to. As a result, a track like “Heat,” leaves more of an impression, than one might presume.

I’m rich/billions fool/don’t drool/keep your cool. Bing has an idiosyncratic delivery, that has some parallels to Notorious BIG. At times, he is slightly behind the beat, but it allows you an additional moment to focus on the lyric. Bing holds little back on “Heat,” and like many from his great state, is unapologetic about who he is. It’s refreshing and striking at the same time, as Bing blends his views with his art to create a tapestry of truth.

“Heat,” may not be the breakout track for Bing, but it shows a lot of promise. He has a keen sense of writing and arranging, and if he can channel those skills into a mutually advantageous partnership, he may just have something. Not to discount the track, at all, “Heat,” will stay with you longer than you expect it to. Bing brings something quite signature and representative of his very personal outlook to the table, and it makes for a more memorable listening experience. The Rapper is turning up the heat on this one, and one way or another, you will feel it.

The music of Bing has been heard all over the world in partnership with the radio plugging services offered by Musik and Film Radio Promotions Division.  Learn more https://musikandfilm.com