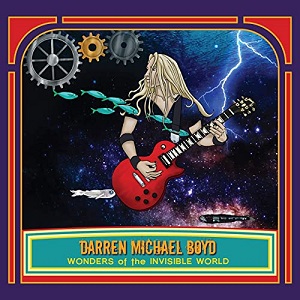 When you listen to Darren Michael Boyd’s new record Wonders Of The Invisible World, you know exactly how he feels. Perhaps by his own innate talent, or due to the self-released nature of the record without major label interference the anger and aggression seeps and lingers. Yet every set of tracks offer a different window into said anger and aggression. The first three tracks, sporting titles like ‘Earth Pads’ and ‘Night of the Neurotoxins’, have a wild, kinetic energy to them. Perhaps it’s the slightly dissonant bass in all the tracks that signifies the otherwise cheery nature of the songs has a sour spot.

A sense of tinged nostalgia – looking back rather than coming from a place of present time. Then, track four – evocatively titled ‘Making a Homuculus’ – fully injects that disconnect into the entirety of the facade. ‘Making a Homuculus’ immediately causes the listener to reflect on details of Boyd’s personal life. Is this, perhaps, a rumination on his nearly career-ending injury? Maybe the painful aftermath that followed? ‘Homuculus’ features a waif-like cry penetrating in the background, an all-too-familiar riff on Boyd’s electric guitar, but arguably a sadder, more grown-up feel. This is the part of the movie where the hero falls, where if he is lucky – he is tested.

Darren Michael Boyd, a native of Ottawa, Canada, was a celebrated electric guitarist early in his career. He worked in collaboration with, as well as a songwriter for, notable Canadian and US talent such as Calico Cooper, daughter of rock legend Alice Cooper, rock drummer Emily Dolan who performed with the likes of Kim Wilde, Black Ju-Ju, and Famous Underground. His step into being the star of his own show occurred when he had a life-altering accident on the road, the intensive physical therapy and complications following that formed the basis for his debut album – aptly titled Lifting The Curse – and then his sophomore effort, Wonders Of The Invisible World. While both albums were refreshingly unrestrained and painfully personal in their musical implications, Wonders feels like a cleaner, more objective effort. The personable nature of Boyd still shines through every track, but with some degree of distance from his personal struggles the arrangements and composition are cleaner, the cutting-edge nature of his guitar riffs expertly matched with a sparse group of supporting instruments more precisely in tune.

Arguably the strongest part of Wonders Of The Invisible World is its last third, where tracks such as ‘Ice Storm’ come into play. Whereas the theme of the first few tracks arguably is naïveté, the second being pain and disillusionment, the third arguably is about survival. There isn’t necessarily a sense of closure – Boyd is blunt and curt with his messaging, but there is a sense of grit and righteous anger. ‘Ice Storm’ in particular evokes this. The drums have adopted a more harsher sound on the mix, the guitar volume amped up a little higher. The bass is more apparent, especially listening to the track on headphones, and one literally pictures a man struggling to rise to his feet.

The anger communicated in the track makes it one of the more gratifying pieces of music on the album, a nice contrast to the sadder, more contemplative and melancholic sounds found on ‘Homuculus’. If pain is a theme in Wonders Of The Invisible World, then it’s communicated beautifully. For Boyd, there literally and metaphorically are no words. You are shown, not told, by each track’s differing levels of ferocity. It’s a welcome change…