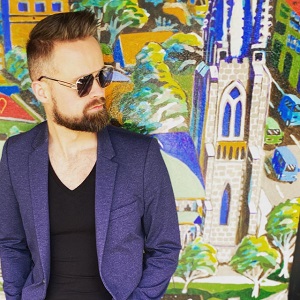 Immersing us in a vibrant groove grown out of synthesized warmth and a strutting guitar element that makes you want to crank the stereo to 11, Dom Cotton’s “Get Me Outta Here” isn’t a track that wastes a lot of time on a big progressive intro; we’re right into the guts of the glory right out of the box. Cotton takes a minute stepping up to the microphone mostly as a means of letting the band behind him get the energy raging as hard as it can in a contemporary pop-rock song, but once he’s owning the verse, it’s as though there’s nothing else in the mix we can totally focus on. This isn’t for lack of sonic clarity – contrarily, it’s a testament to how much presence this player really has.

The music video for “Get Me Outta Here” adds to the substance of its source material rather than simply illustrating the emotion in the lyrics through visual props we’ve seen purposed in every different way through the years. I get the idea that Dom Cotton, while not being the minimalist post-hipster songwriter some of his rivals are, has an interest in keeping things on the conservative side when it comes to developing and producing a hook, a video, or anything else considered a part of his body of work, and given the indulgence we’re seeing from across the underground spectrum at the moment, this could make his quite the lucrative and rare treat for audiophiles to soak up this coming fall.

While the vocal can be light as a feather in “Get Me Outta Here,” the same can’t be said for the beat or the harmony it’s framing, both of which are strong enough to where I don’t think any amount of aural accentuation could have broken up the solidity of either part. There’s just too much heart sewn into the rhythm and the way relationship between Cotton and his melodic instrumentation in this performance for us not to get hypnotized by the collective push of the band at full power, and if he’s got this kind of charm singing from within the four walls of a recording studio, I’m going to be very interested in seeing how he does on stage in front of a crowded concert hall hungry for good music.

There’s a lot of soul in this debut single from Dom Cotton, and if you’re the type of pop fan who wants something extra from the genre often misjudged as being removed from human emotion, “Get Me Outta Here” might be just the song you need to hear this September. Time will tell for sure if Cotton has the right stuff to make it on the mainstream level, but judging from what he’s already got in this initial solo piece, it’s a little challenging for me to accept the notion he isn’t going to make it to the next rung on the ladder of fame a lot sooner than later. “Get Me Outta Here” is more than just a good debut – it’s a statement about where its composer is at, and what is on his mind as an indie rising star looking into the future.