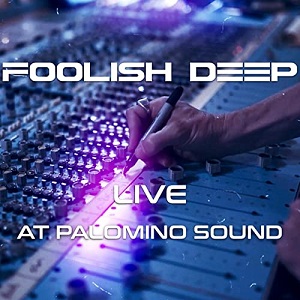 Foolish Deep is a five piece steadily carving out a reputation as one of the most musically inventive acts of their ilk emerging in recent years. They join a crowded field of talented peers and contemporaries confident their voice will be heard above the din. Their faith is not misplaced. The Southern California based band’s new release is Live at Palomino Sound, a five song EP that, as its title describes, depicts the five musicians in full flight sans overdubs.

It’s heartening to hear a young band taking a deep breath, lowering their head, and marching into the pandemic’s continuing headwinds. It isn’t the live performance Foolish Deep wishes they were delivering, to be sure, but the best units continually search for ways to connect with their audience and potential admirers. Putting their best musical foot forward with this release frames Foolish Deep’s musical and songwriting talents in the best possible light.

The band describes their music as alternative pop with an 80’s pop influence. The EP’s opener and first single, “Looking for the Moon”, clearly bears that out. Lead guitarist Juan Valdez pairs well from the outset with vocalist/rhythm guitarist Caspar; they generate airy chemistry and the production accentuates their light effects. The results are never overwhelming. They are, instead, tasteful and measured.

The production, likewise, lends added emphasis to the rhythm section. Bassist Leo Vasquez and drummer Lucas Bidran play to the song rather than diluting its impact through needless flash. There’s no doubt though that the song’s production gives it considerable more oomph. The song’s glittering surface is reminiscent of five-star eighties pop, but “Looking for the Moon” is far more mature than stereotypical efforts in that vein. It boasts its own identity from beginning to end.

“Never on Her Feet” features tense guitar work, a sleek mid-tempo pace, and masquerades its singer/songwriter heart beneath a glossy exterior. It recalls the guitar-heavy work of pop rock bands such as The Fixx, among others. Once again, however, the performance and songwriting alike possess individuality that shines through. Caspar, in particular, deserves praise for his second knockout vocal in a row.

His soulful inclinations highlight “One More Shot” as well. The contrast between his bluesy overtones and the pop laden sonic landscapes of each cut is unexpectedly successful. Another memorable component of this track is the reverb-peppered guitar but, as before, Foolish Deep never overplays their hand. “Stranger” concludes the release on an ambitious note. The near eleven minute long track reaches further than any of its predecessors

It’s the album’s peak for several reasons. This song marks the pinnacle of its guitar interplay as, for a final time, Foolish Deep orchestrates their six-string attack in a complementary way. There’s no pandering for the spotlight. Ample evidence exists in the previous four tracks that they are capable of filling larger canvases such as this and “Stranger” fulfills that promise. It plays like a much shorter performanc. This is a superlative final touch on an album certain to satisfy anyone appreciating substantive and entertaining pop music.

User Rating: Be the first one !
Share
Previous Dom Cotton “Get Me Outta Here” (SINGLE/VIDEO)
Next ARIADNE