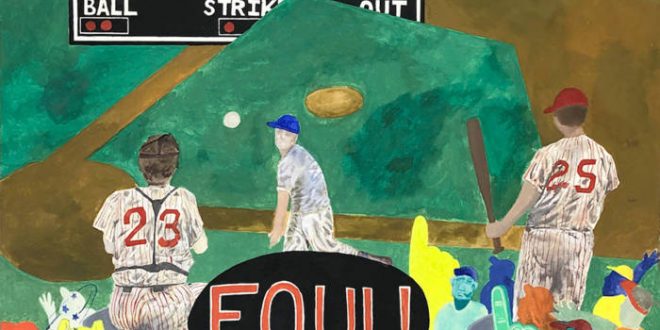 The ten songs on Don Babylon’s new album Foul! are unapologetically autobiographical, but it doesn’t prove to be any sort of impediment towards listeners finding their way into this release. Aubrey Neeley’s songwriting finds a way to make even the experience of playing in a rock band universal to his listeners by emphasizing the mundane every day sacrifices he and his band mates are required to make for pursuing their dreams. The Virginia based power trio has relocated to Philadelphia for the writing and recording of this album and the charge of finding themselves in new, alien surroundings makes its way into the album’s songwriting and likely provides extra urgency to these performances. Their preceding album Babe established the band as one of the more promising alternative rock outfits working on the indie scene today, but this new studio album takes things a step further and shows they have a number of different faces for audiences.

There’s definitely a punk rock spirit percolating to the surface of Foul!, though it isn’t the dominant voice by any means. “Lose Sometimes” begins life as a spartan, cut to the bone rhythm guitar rocker with stuttering razor wire six string lines, but Don Babylon has some surprises up their sleeve well in keeping with the song’s spirit. They also opt for a hard-charging bloody knuckles approach to the guitar work that gives it a rough and ready sound. “Line Cook Blues” reins in that aspect of their music some, but the same ingenuity fueling the opener is present here accompanied by a playfulness the first song doesn’t quite prepare you for. Lead singer Aubrey Neeley has an exceptional ability for manifesting his charisma through these songs that makes potentially challenging textures much more palpable for a broad based audience.

“Mach III” is another cut with its roots thoroughly steeped in punk rock tradition and the uptempo pace of the tune keeps you bobbing your head from the first. It isn’t a varied tune, Don Babylon latches onto its central musical idea early on and plows straight ahead from there, but they keep things brief and it has a strong impact on the listener. One of my personal highlights comes with the intensely autobiographical turn on “Rocky XXVII” and the plaintive vocal from Neeley helps makes this experience open for listeners who’ve never attempted to start and sustain a musical band. Anyone who has ever put something on the line for what they want will relate to this songwriting and the clearly emotional slant Neeley puts on his voice serves the song well.

The finale “Started a Band” risks the same obscurity but, once again, Neeley and his band mates do a first class job of involving listeners in their experience. The slightly heartbroken and self deprecating humor at the song’s heart is key to its success and ends Foul! on a highly appropriate note. Don Babylon’s decision to move to Philadelphia for this album pays off with a release quite unlike anything else they’ve recorded before thanks to the added shot of inspiration

User Rating: Be the first one !
Share
Previous Patiently Awaiting the Meteorite release LP
Next Jim Clements – A Failure