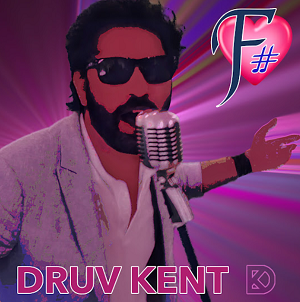 The actuality of being an indie artist doesn’t always mean you’re beholden to twangy guitars and folky composition — in the last decade, the idea of “indie” music has lost the plot and become indicative of something closer to Bon Iver and Mumford & Sons as a style choice than an indicator of where the artists fall in the record label and studio system; the concept of “indie love songs,” as a result, has gone on to become a twee, niche signifier of a certain kind of music, but there’s no denying that indie love songs can still exist in the genres outside of folk acoustic, and they do! One such example is Druv Kent’s newest single from his EP Love in F# titled “Million Ways.” It’s an upbeat, unique piece of songwriting that captures the essence of what it means to be an indie pop artist perfectly, and it is the encapsulation of what an indie love song should be.

“Million Ways” is fairly traditional in its pop composition and lyrics — comprised of guitar, electronic flair, Kent’s powerful vocals (both in lead and harmonies/backing vocals), and electronic percussion, there’s a style of song here that listeners have been missing for years.

There’s a flair of Flamenco in the guitar twang, and the use of Kent’s vocals both in the lead and the supporting roles for the chorus gives the song a defined personality and presence that deserves to be heard on the radio. It’s a catchy track, and the optimism that Druv Kent wears boldly on his sleeve is infectious; listeners won’t be able to stop themselves from being caught up in the bubblegum melody and joy in the lyrics and song’s overall production. Listeners might even liken it to the songs that came from last year’s animated Disney film Encanto, as it carries the same weightless happiness that those powerfully catchy songs did!

While Druv Kent and his music don’t fall into the popular trappings of what it means to be an indie artist making indie music (he does use guitar, though!), there’s no denying that the independent spirit and tenacity he possesses are formidable when put up against his pop contemporaries — there’s a retro feeling to “Million Ways” that listeners will 100% feel drawn to, as the song carries its lyrics as if they’re floating on a cloud of pristine pop instrumentals. There’s no worrying or getting bogged down in the semantics, it’s simply a song dedicated to the joyous feeling love can give to people and the rush of emotions that comes with the territory.

The pop spirit of the track is found across the rest of Kent’s latest EP, as songs like “Magaresa (Runaway)” and “Wanna Love Again” carry the torch in a similar fashion as “Million Ways,” but it’s the latter that finds Kent unburdened by any emotional anchors — “Million Ways” is a single for the resurgence of joy and love in a post-pandemic world, and it’s the perfect pop anthem for the job.

The music of Druv Kent has been heard all over the world in partnership with the radio plugging services offered by Musik and Film Radio Promotions Division.  Learn more https://musikandfilm.com