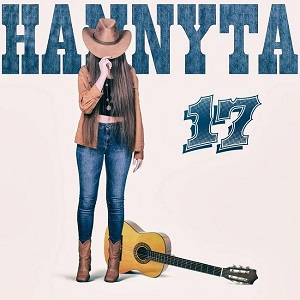 The newly remixed single by Hannyta, “17” is a moderately electrified hype piece. The Houson Boombox mix as she is calling it, this version is a rather sharp contrast from the original. Giving the song the David Guetta treatment, “17” evolves into something not entirely original, but a departure worth acknowledging. Remixes are common amongst big name artists, but can be somewhat of a rarity in the independent scene. Hannyta shows herself to be somewhat calculating by offering a fresh, alternative take to one of her singles.

Born in Hungary, Hannyta was raised in Scotland. This might explain why her grasp of English is decidedly commanding. She fell in love with America, while spending time in Florida, and that love shines through in her music. There’s a European presence on “17,” but The Houston connection is unclear. As far as remixes go, this one is modest, yet highly engaging.

Things start off steadily, with a programmed drum mix, that brings in the vocal. Hannyta sings with a distinct mixture of radiance and innocence, and shows impressive vocal chops. Her musicality is instantly evident, even if she does fall into youthful tropes, occasionally. The notion that this  Music is by kids, and made for kids, might be a bit of a blanket statement. Hannyta simply seems to be cognizant of what her audience will or will not embrace.

Well produced and enjoyable to listen to, this version of “17” is meant to be fun, now, and reflective later. There is a noticeable similarity in the chorus to The Fixx’s big 80’s hit, “One Thing Leads To Another.” Say what you mean/mean what you say, Hannyta has one of Life’s simplest courtesies figured out a young age. This track is admittedly catchy, and most will find its charm to be undeniable. It’s not quite bubblegum, but there’s just enough sugar to keep things balanced.

Hannyta’s vocal performance is top notch, and though her style is still developing, she is fundamentally sound. Her voice lends itself to several different types of genres, and she shows a wide range on “17.” She doesn’t go for any money notes, but instead stays consistent with a mid to upper register. She shows a competence that is rare for someone of her age and experience. All things considered, this is a strong outing for Hannyta, even if the vocal is most likely lifted from the original recording.

While The Houson Boombox Remix will not be what Hannyta is ultimately remembered for, it is a valuable addition to her catalog. This piece is almost entirely designed to present another facet of Hannyta, and ideally, expand her audience. If this version of “17” is promoted successfully, it has a good chance of being worth the effort. From a quality standpoint, this mix of “17” is an enjoyable and rather memorable listen. The original cut of “17” is more reflective of who, Hannyta is as a Singer/Songwriter, this remix is a reimagined and emblazoned version of Hannyta.