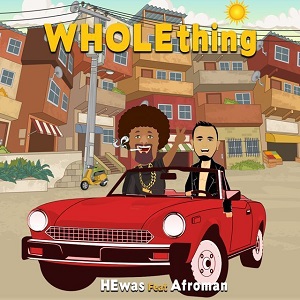 Traditionally, rap has been rather aesthetically rigid on the mainstream level, leaving a lot of space in the underground for indie players and even crossover pop artists to introduce alternatives to the standard whenever a shakeup is needed. This is still true to some extent in 2020, with performers like HEwas finding a comfortable collaborative environment on the left side of the spectrum with rappers like Afroman, a veteran of the game reaching a new plain of his own artistry. The new song “Wholething” sees these two getting together for some real magic in the studio that further utilizes pop foundations better than most any other pairing of artists I’ve listened to in the past few months. From the moment we press the play button on “Wholething,” there’s a casual personality to its music that makes it almost impossible to dismiss as a barebones pop tune. It’s free of unwanted fat, but if you’re looking for something that has the right hook and potentially one of the best young songwriters out of his scene, this is a single you really cannot go wrong with at the moment.\

The synths are at times even bigger than the lead vocals are in this track, but I don’t get the idea that this wasn’t a completely intentional feature on the part of producers. HEwas took the opposite approach with his 2020 debut “Lemon,” and I suppose that in going the other way with “Wholething,” he’s making his interest in sonic and compositional versatility all the more obvious to listeners.

The bass here has an awkward place in the master mix, but I’ve always been partial to the eclecticisms one is inclined to find in this particular strain of alternative hip-hop. It’s not blasting us in the face with a lot of macho melodic showboating (which is always a plus), and better yet, at no point does the harmony my man is putting together in the chorus become dominated by a bottom-end tonal presence. A nimble management of the lyrics from both of these vocalists is half of the treasure chest in this single, making the verses feel way more freeform than they actually sound. Some might describe all of this as working overtime on a track destined for college radio, but when you really think about it, isn’t that what a true artist does?

If you’re not keeping tabs on HEwas right now, you need to know that the time get into his sound is definitely here. With this collaboration with Afroman, he advances to yet another level within the hierarchy of independent pop songwriters gaining steam in the American underground in 2020, and while I was initially hesitant to say as much, I think he’s going to find mainstream support for any debut album he puts out if “Wholething” wins the accolades it deserves. With or without a collaborating partner, HEwas has shown himself to be a top notch musician in either instance this year, and that’s more than I can say for some of the other rooks he’s up against.