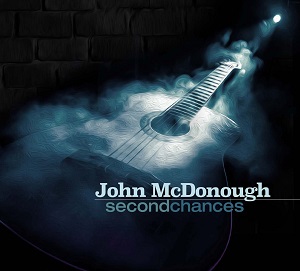 John McDonough’s new LP, Second Chances, is a stellar extension of his already full body of work. An entirely acoustic project, McDonough strips down his sound, to deliver an emboldened and impassioned performance. Sporting 10 tracks in all, Second Chances, features acoustic versions of select choices from McDonough’s previous efforts. The result is a uniquely structured album, that feels thorough and emotionally charged, with moments of buoyancy. McDonough possesses a distinctive sound on Second Chances, that steadily escalates , to a satisfying finale.

Originally from Austin, TX, John McDonough certainly honed his chops in what is considered the live music capital of the country. For your formal musical education to come in a city such as Austin, is the equivalent of matriculating at an Ivy League University. Because of the sheer quantity of acts, plying their trade in the Texas city, at any given time, not to mention the quality, one must consistently over perform. Therefore, McDonough’s confidence is readily evident across the LP. His commanding vocal style, and guitar skills are front and center on every track, which prevents anything from being considered as filler.

The production on Second Chances, leaves little room for critique. Even the slightest of details are generally, impeccable, and the record sounds polished, without being overproduced. Lead Player, Kris Farrow’s, tone sounds pristine, as every string is given ample room to reverberate, resulting in a clear and pronounced quality. There’s an airy harbor like ambience to the record, that suits John’s voice, well. He delivers every song, consistently, with little restrain, and focused alacrity.

Give me the rain/let it wash all over me, McDonough sings on “I’m Home.” It’s a track that muses over the finer points of wanderlust, as the weary, but spiritually nourished traveler returns home. It can be presumed to be autobiographical, as John has stated his intentions to tour, Europe, as soon as it becomes more viable to do so. He really pours himself into the chorus on this one, presumably to emphasize the spiritual resolve achieved by returning to your roots. It’s this sort of self honesty, that makes this record, so disciplined.

It’s tempting to apply the overused “unique” to describe John McDonough’s sound. However, it’s not so much his sound that is so distinctive, as it is his approach to creating that sound. He has a booming, powerful quality to his voice, that particularly stands out in an acoustic setting. It’s possibly the most defining aspect of this album, from a musical standpoint. The juxtaposition of John’s voice and the delicacy of acoustic guitar, could potentially clash, but somehow it works, seamlessly.

Second Chances, although a rehash of previous works, is a standalone effort. It’s instantly identifiable, and it succeeds in being a remarkably accurate depiction of McDonough, the artist. It is certainly a “full” album, at 10 songs, but John wisely doesn’t unnecessarily extend any sections, and often keeps tracks under the 3 minute mark. Not that it would matter, of course, but upon my first listen, it felt as though the record flew by, making me eager to revisit it. You quickly realize that some things really are worth, a second chance.