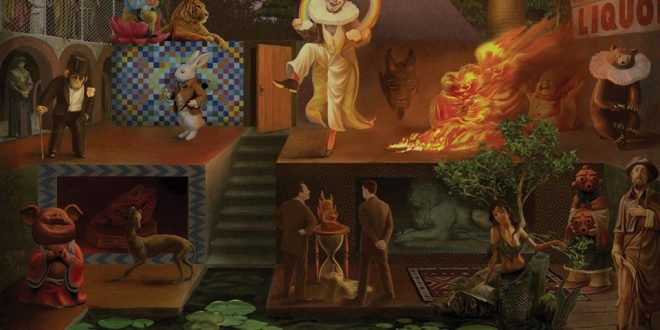 Though as powerful as the riffs beside it in “Fuck Yeah” and yet approachably melodic in the title track from Kingdom Illusion, the lead vocal in Whiskerman’s all-new album is hardly the conventional linchpin some would expect it to be in a record as ambitious as this one is, but it’s a binding element as essential as any other just the same. Utilized as a means of tying together the more eclectic edges in songs like “Something About Love” and “Rattlesnake,” the singing in Kingdom Illusion is definitely reason enough to acquire this LP, but far from the only gem to behold in its treasure chest of tones.

Beyond the lyrical dispatches in this record, there’s no getting around the fact that a lot of the songs on Kingdom Illusion are fodder for a guitar-lover’s paradise. “Belly of the Beast” has the throttling groove of a garage rock anthem, while “Villains” plods forth like an old school jam re-stylized for the needs of a particularly discriminating generation of millennial listeners, and in both instances, the strings are the most defining component for us to absorb. Part of this is because of the masterful mixing here, but more than anything else, it’s because of the natural prowess Whiskerman have with making mad riffage.

Though it’s not quite In Utero, I don’t think it’s much of an argument whether or not Kingdom Illusion is the most abrasive effort we’ve heard from this band to date, and I for one love this about the album. Even more refined moments, like those found in “Be Real” and “The Great Unknown,” are bolstered by a take no prisoners-style DIY aesthetic that is nowhere to be found amongst the major label rock records out this March, and while it isn’t for everybody, I think the graininess of this material speaks volumes about the integrity of this band’s studio ethic. There’s no fluff here, because Whiskerman simply have no time for it.

There’s an underlying experimentalism to the construction of the title track and “Rattlesnake” in particular that I would really love to hear more of in the future, and whether it comes in the form of an all-out concept album or just another loose psychedelic opera like Kingdom Illusion, I think it could do wonders for Whiskerman’s reputation in and outside of psychedelic rock circles. They’ve got a knack for cohesiveness that has never been as obvious as it is here, and it would be a shame for this talent to remain an underground oddity as the 20’s come into focus.

If what I’m hearing in Kingdom Illusion is going to be on par with what Whiskerman plan on producing in the next couple of years, then I believe that the best is still to come for this talented psychedelic syndicate. They pulled out all the stops to make this latest offering as stinging as it is surreal, and for all the buzz leading up to its release, all eight of its songs live up to the hype and then some.