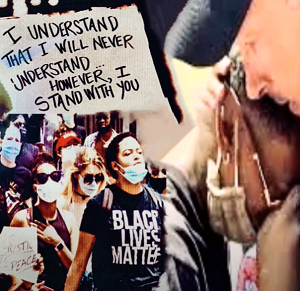 Lacy J Dalton Confronts Racial Devastation with Nuance on her single “I Can’t Breathe” 2020 has been a hotbed for reactionary singles and albums, and how could it not be? As we’ve all been cramped in our homes, some alone and some with our loved ones, one benefit I think that’s been understated during this time, is allowing more dense music to have the time to sink in and linger with their audience.

There have been a myriad of 2020 releases covering the tragic murder of George Floyd and Breonna Taylor at the hands of local police, and admittedly to mixed results. As a black man writing this, I do not think that art that is raising awareness to racial injustices and struggles are beyond criticism. I would however also argue 2020 has seen a much better and nuanced approach to these specific plights than in former years, and no better example could be heard with Lacy J Dalton’s “I Can’t Breathe”. Dalton, a veteran multi Grammy nominee who’s worked alongside Willy Nelson, Glen Campbell and George Jones to name a few hasn’t come here to mince words or to placate the sensitivity of others who might feel uncomfortable given the subject matter.

Her resolve upon first listen is a very minimalistic approach, the instrumental lacking any major percussion in favor of a focused soundscape of both electric and acoustic guitar. The evocation of Tom Petty’s “I Won’t Back Down” can’t merely be coincidental, and that’s not at all to the detriment to the songs potency. Lyrically, it’s very straight forward. We (the listener and Dalton) are tired of this. We’re fed up with the injustice and the devastation it continually brings, but the power the song really holds is in its vocals. Dalton’s voice oscillates between soaring passions “I can see your pain!” to the nearly defeated and breathy (no pun intended) deliver of the now infamous words “I can’t breathe”.

Something of note that also helps the songs message, is its shocking display of self-awareness. I have heard many anti-racism anthems made by white musicians that try to reappropriate the cause for themselves or to compare their often sheltered lives to the cruel harsh realities that black people in America have suffered for so many years to naturally, poor results. Dalton immediately makes it clear that she has never been in such a situation “I have not walked in your boots” but that the pain cannot and should never been avoided or downplayed. It lacks any of the cynicism that even billion dollar corporations fumbled while trying to prove they were allies to the cause.

Authenticity goes a long way, especially in culturally relevant works such as this, and it’s evident in its craft. Many times listening to the track, it felt less like a song coming from a singular perspective, and almost like a conversation between two worn down souls still trying to make sense of the tragedy that has become almost regular in an increasingly irregular world. The song offers no easy solutions, and I don’t think was its purpose, but to maintain the conversation and to truly listen to those who can’t breathe. Proceeds from the song will go to the Equal Justice Initiative.