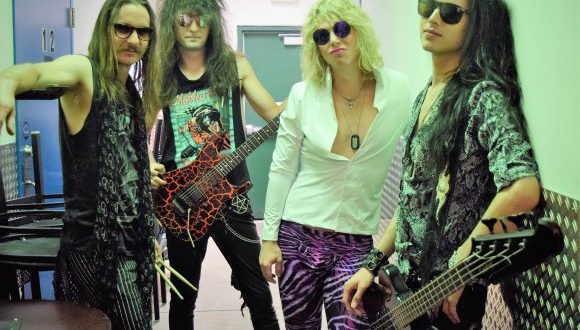 Hailing from the Denver, Colorado area, Love Stallion are definitely a throwback act insofar as they play a style of music whose mainstream popularity has long been in eclipse, but it thankfully sounds like the band never got the message. The nine songs on their album Unforgettable Ride play like the EDM and hip hop revolutions never happened and swears its everlasting musical loyalty instead to influences like Kiss, Def Leppard, Motley Crue, and Van Halen, among other bands of that era. It never comes off as overly imitative, however, as the band brings a generous amount of themselves into these songs and set themselves apart from acts like Steel Panther by writing straighter, less self conscious songs. Led by lead singer Aaron Hart, Love Stallion are blessed with a front man with deep, genuine talent and the level of musicianship surrounding him is enough to merit discussing this album as one of 2018’s best indie rock releases.

“Slow Release” begins the album swiftly establishing the band’s rock credentials for any newcomers to their music. They have a well rounded sound for modern audiences, never wholly reliant on guitar, and instead juxtaposing it with their frequent use of vocal harmonies with excellent results. “Ignite the Night” is one of the more commercially minded tunes on Unforgettable Ride without ever being too dumbed down and the band’s instrumental talents come through even on a relatively simple, straight-forward tune./ Aaron Hart’s vocals stand out here even more so than the album opener. They put down a heavier foot than before with the third song “Big Rock Radio” and Rob McLemore’s guitar work is critical for this song’s success, beginning with its memorable riff. It’s another occasion for the band to exhibit their vocal prowess and Hart is ably supported by guitarist McLemore and bassist Aero X while still retaining the singing focal point.

“Hide Me Away” has another great riff, but it’s the high point of a run of songs on the album where the band diversifies their approach and refrains from pursuing straight out, unabashed rockers. Instead, Love Stallion incorporates even strong vocal harmonies between the band’s three voices and uses McLemore’s guitar in a more ornamental way during those passages. It adds another color to the band’s sound while never sounding out of place or disjointed. “Valentine” provides another peak moment on the release as Love Stallion largely departs from their sound up to this point in favor of a different slant, but they exceed expectations even more with the album’s last song “Trans-Am” as there’s more rough hewn rock riffing with this one than we’ve heard with any other song on Unforgettable Ride. Love Stallion’s progress since first coming together in 2016 is a marvel to hear and they sound like they’ve realized their musical vision for this band. It’s definitely a retro sound, but they recast the familiar in terms their own and are certain to win over any fan of guitar rock with this album.

User Rating: Be the first one !
Share
Previous Crack of Dawn – Spotlight
Next The Jackstones – Love Badly (LP)