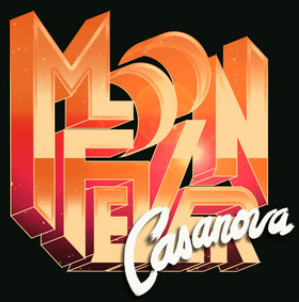 Hollywood’s Moon Fever arrive with a mandate to enter rock’s first ranks with their new single “Casanova”/ The five piece outfit are wildly successful revamping of a bracing retro rock sound they bring into the modern era. Their songwriting shows remarkable maturity and it’s thrilling to consider where they can go from here. This is the song Grade A rock single that longtime fans of the genre often despair of hearing in a time when pop country and hip hop dominate the global musical consciousness but Moon Fever answers their prayers with this gripping trick. They possess an obvious stylishness as well that will ensure they are a force for years to come. You’ll be converted.

The catchy melodic guitar riffing has rugged qualities and a propulsive edge accented by the rhythm section. The twin guitar attack from six string slayers Mitch Micoley and Joe Perez romps with unabashed glee while bassist Gabe Maska and drummer Greg Garcia buttress their efforts with rock soild playing. Vocalist Cody Jasper is a revelation as well thanks to his clear confidence, bubbling charisma, and the way he unleashes the lyrics with snarling contempt for the song’s subject. This isn’t a coy love song. It’s a sexualized struggle between a man and woman in lyric form.

Moon Fever pare their lyrics to the bone – there’s not a single extraneous word throughout the track. It is, likewise, a shrewd move for the band to follow in the tradition of recent producing a lyric music video for the single and the polished graphics in the foreground hold the eye’s attention throughout this performance.  The 2:38 running time for the song shows they mean business and they refrain from tossing in any gratuitous musical flashes in an effort to show off their  skill. This song is a glorious gut punch from its opening drums through the end.

They proudly trumpet their heritage as an Los Angeles rock band but what they are doing here supersedes almost anything you heard from bands prowling the Strip in those halcyon days of the late 70’s through the eighties. They wear their own identity well. While they wear an obvious identity, there are no clear reference points with bands of the past and the level of polish compliments their rambunctious rock chops.

Micoley and Perez, as mentioned earlier, refrain from taking any unnecessary lengthy solos, but they do pepper their performance with searing flashes of guitar work punctuating the track’s attitude without obscuring the contributions of other members. This shows how tight the band is and, unquestionably, later efforts from Moon Fever will only illustrate this point further. They are, to borrow a cliché, a band on fire.

That fire will burn even hotter in years to come. If you are an unabashed fan of melodic hard rock broiling with conviction, you will want to come back for more from Moon Fever. Their enormous potential demands any serious music fan take them serious as they are clearly not some cookie cutter pre-packaged act. “Casanova” is the real deal