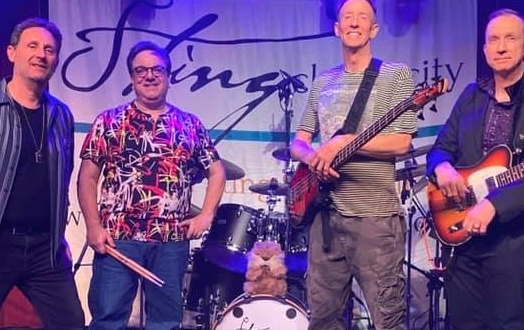 It can be hard for cover bands to convey the same sense of emotionality that their source once did – most often in iconic fashion – but that’s not the case for Stingchronicity, an east coast Sting/Police cover act that have been making big waves in the underground circuit recently. Rather than simply taking the model set forth by the legendary rock group and their enigmatic frontman as a blueprint to be followed with surgical precision, Stingchronicity put their own vibrant spin on the music of The Police and Sting that delivers arguably as provocative a melodic wallop as the original tracks did, which, as any discerning audiophile is more than aware, isn’t easy even for the most talented of players.

Stingchronicity’s recently released promo video for their live performances contains raw stage cuts of “Message In a Bottle,” “If I Ever Lose My Faith In You,” “Roxanne,” “Every Breath You Take,” “Synchronicity II” and “Every Little Thing She Does is Magic,” and while all of these songs sound familiar in spirit, the instrumental attack that the band employs here is anything but predictable. “Every Breath You Take,” and especially “Roxanne,” get an aesthetical redressing that exploits each track’s unspoken balladic undertow for everything it’s worth, while “Synchronicity II” definitely rivals the enthusiastic punch that Queensrÿche afforded the composition when they covered it some years ago. There’s no denying the sonic footprint left behind by the original composer in these songs, but by and large, you’d be hard-pressed to find another act performing them the way this crew is.

There’s an organic chemistry between the players in this band that certainly reminds me of the original fluidity between The Police in their earliest recordings, and while this is pivotal to establishing an original sound in mainstream rock, it’s definitely not a feature that could be described as commonplace among cover acts at all. Stingchronicity don’t even have to dress the part in their medley video to convey the same sort of attitude that their muse did decades ago; instead, you can tell that these are players who take the songcraft behind the material serious enough to put their own emotion into the melodies of tracks like “Every Little Thing She Does is Magic” and “Message in a Bottle” as opposed to merely recycling anything from the past.

If what I’m hearing in this new video from Stingchronicity is just a taste of what’s to come from their band in the years to come, I think they could become one of the more respected cover acts in the American underground before the year is out. The Police, and specifically Sting, set the tone for a lot of alternative artists that followed them, and while this group isn’t interested in forging something independent from that legacy here, they’re definitely putting together a tribute sound that is anything but stale. I’ll be looking forward to hearing how they develop after building up a stronger street cred, but for now, this is a band you want to go see if they’re playing your town.