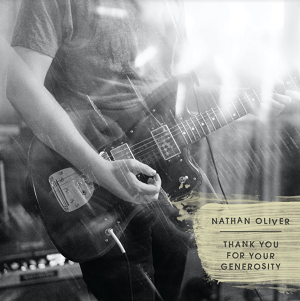 Nathan Oliver’s – “Thank You For Your Generosity” (LP)

Nathan Oliver’s – Thank You For Your Generosity, is his fourth release and could be his best work to date but that is yet to be heard by me, it’s just that the buzz is extremely good and it does indicate this one to be a fan pleaser that way. This album can make a fan out of anyone that hears it, so it comes highly recommended from that perspective alone because it is my first time hearing this very eclectic but also very pure rock artist. The point is this album is supposed to go a step beyond the basic rock framework Oliver is usually known for.

The first thing to examine for me was the instrumental opener “Generous Seas” and the way it hypnotically drew me in from the start and kept my full attention throughout, almost the same way from the late 60s would do in more-or less a psychedelic way. Oliver describes it as something relative to a song of the past, but also does not lack any modern values. But the contrast it sets you up for also had me intrigued about half-way through and “Isle Of Youth” comes rocking out of the speakers and this is where the album takes off.

The band in which Oliver is backed by are of the same world class variety and play equal parts, leaving Thank You For Your Generosity sounding more like a band project. You get that feeling as the collection continues, as if everyone showed up and did not mail it in. Songs like “Everyone’s Swimming” have that harder edge, with a message about moving forward and not looking back and losing time. And then there is the wonderful “Air Control” with its funny tale about Oliver’s grandfather’s heating and AC company that used to get peculiar UFO sighting calls.

“Even If You Go” is an extraordinarily sung tune by Oliver, with the low register making it sonically the deepest track on offer, with some very compelling vocals and lyrics and it also marks the peak of the album. But I also find “Stand In line” to be one of my favorite tracks, it is one of the more contagious to Oliver songs on Thank You For Your Generosity. The best thing about it is the pop laden vibes and the sheer energy, you cannot deny it is an awesome album, but not unless you hear these songs for yourself.

The quality of songwriting and production is track for track consistent, so “Runaway” is no exception to that rule, with some truly-fantastic melodies and charged up guitar and drums and once again Oliver tells a story, this one about life in suburbia with no sense of purpose. It is an album centered around time, released timely during the pandemic, so it is reflective of the times. “A Tangent In Time” closest the album with another extraordinary vocal from Oliver about how time lies to us all on a release worth taking the time to hear.

User Rating: Be the first one !
Share
Previous Marcello Vieira Releases “Southern Outlaw”
Next “Get Up And Dance (electro remix)” from Zarbo