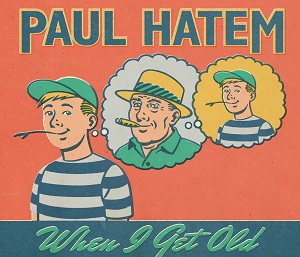 Paul Hatem is a once-in-a-lifetime sort of songwriter. The simple comparisons to Cat Stevens or Neil Young are there, but Hatem’s latest album When I Get Old makes a great case for something far different. There’s a knack for humor and a distinct grasp on the small moments in life that define humanity, and there’s hardly anything getting released like Hatem’s songs today. From a song about a brand new baby brother (“Simon”) to a song chronicling Hatem’s cross-country breakfasts (“Pancakes, Bacon and Eggs”), there’s no defining curve or direction to the When I Get Old that leaves listeners with expected results, and that’s exactly where Hatem shines.

“Simon” opens When I Get Old with great humor and humility. The tongue-in-cheek approach to how an older sibling can feel when a new baby comes home is done in good taste and with enough insight that it feels fairly personal. It’s a catchy tune, too! “Hot Day in the City” is a bluesy love song Hatem wrote for his wife’s 50th birthday and it has a defined groove to it and doesn’t waste effort in melodrama.

This style of songwriting is where Hatem excels, as he is a master craftsman of lyrical stories. “I Think of You” eases its way into your heart and lends it a gentle heartbreak as it chronicles a painful break-up; the harmonies and woodwinds backing up Hatem’s voice are an excellent addition to the song’s composition. “Geese” is a far more up-tempo and pop-driven track that incorporates the same tasteful clarinet; it evokes touches of Joni Mitchell with its peaceful lyrics recounting life events. Title track “When I Get Old” is a great track in the same vein as the classic Beatles track “When I’m Sixty-Four” — there’s a great jazzy rhythm to it and its near-duet structure is a great framing device.

“I Wish Mom Would Come,” according to Hatem, is about waiting for his mother to pick him and his siblings up from the YMCA after swimming lessons. Similar to “Simon,” this is the type of song that makes When I Get Old soar. Bittersweet reflections on tiny pieces of time most would easily gloss over in their life stories is where Paul Hatem’s lyrical mind dwells and to great effect. “Hot Summer Nights” reminisces on the joys of a childhood home, a more predictable angle than the prior track that gets the same result, but the syrupy instrumental evokes memories from the listener’s childhood.

“Knuckleheads”… well, watcha gonna do about it? (That’s Hatem’s answer to the world being full of the titular knuckleheads. It’s a fun little punk-lite track that gives the album a bit more dynamic.) “Pancakes, Bacon and Eggs” is another classic Hatem snapshot of the small, finer things in life — it’s a road trip song in every sense, and circles the reliability of the titular meal being able to be found anywhere (with orange juice and/or a cup of coffee.) Using diner audio and actual city names from his road trip gives the song a poignant, rooted approach. “About You” is another break-up song, and it breaks the heart tenderly over steel guitars and beautiful harmonies. “The Dead” discusses life after death with a fun angle; the idea of inheriting all of your life’s baggage on top of now being dead is an intriguing lyrical device, and the tune is one of the album’s best.

“You Were the Mountains” is a solemn note to end When I Get Old on, with its yearning minor key, but tying it all back to the concept of fleeting mortality is the best note to send listeners off on. When I Get Old is nothing if not a pensive album at its core, despite all of the great comedic bells and whistles Hatem throws out periodically. There’s a great sense of wonder and acceptance that permeates the album from start to finish, and the attention to the smaller details is what will make Paul Hatem a household name.