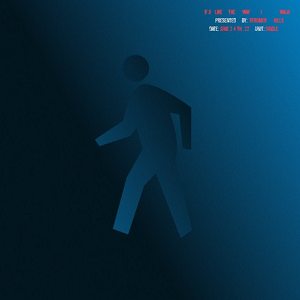 Stromer Hills “if you like the way i walk” (SINGLE)

The opening of Stromer Hills’ “if u like the way i walk” is worth the price of purchase alone. He knew FAST that the song’s chorus hook is its marquee element and pushing it to the front of the line in an effort to draw listeners into the song is shrewd. The remainder of the song has a high standard to live up to following that opening. Stromer Hills delivers, however, with a personal blend of light hip-hop, melody, R&B, and soul that doesn’t sound like anyone else working today.

Much of that is due to his vocal idiosyncrasies. Hills can sing like a proverbial angel and does so during scattered passages, but his voice has a seductive timbre as well. Moments of convincing emotion abound. The canny instincts of a veteran vocalist manifest themselves in the perfect pressure his vocal applies to the song, maintaining a soothing controlled volume. He knows when to turn up the dial, however. The little extra oomph he brings to the first word of the chorus is a subtle but noticeable example.

Let’s not pick the song apart, though. Is this going to make people feel good? Yes. Hills has pinned a melody down for this track that feels self-sustaining; it does need much adornment to hold the listener’s interest. He has the vocal talent and projects the necessary charisma. First-class sonic virtues underpin the track, and you can enjoy it alone as much as with others. It’s instrumentally sparse, but it should be – all focus, instead, on his voice and the hook.

The instruments are used so well though. Guitar fans should give this song a chance as Hills shows early childhood influences in the guitar sound learned from listening to music with his father. It’s coupled, however, with some understated but effective percussion and a memorable bass line. There’s nothing going on during this track that Hills couldn’t pull off, and well. He’s played in bands playing virtually every position and it gives him all-around versatility few peers can match.

Will the song make people think? Yes. This is a pop song, but Hills has intelligence that’s obvious in every line and he has a keen observational eye that attentive listeners will notice throughout the cut. Hills expresses himself with easy, effortless confidence. He never comes across as brash. It’s notable accomplishment in an era when so many lack the same natural, almost effortless, ability to win over an audience’s trust.

Few pop songs come as complete as this and, when they do, they resist calling them pop and leaving it at that. They entertain, wildly, but they leave a lasting effect on their listeners as well. You can’t and won’t easily forget encountering Stromer Hills’ work for the first time and, if this is it for you, you’re lucky. “if you like the way i walk” is an excellent introduction for first time listeners and one of the best tracks he’s yet released. The best part though?