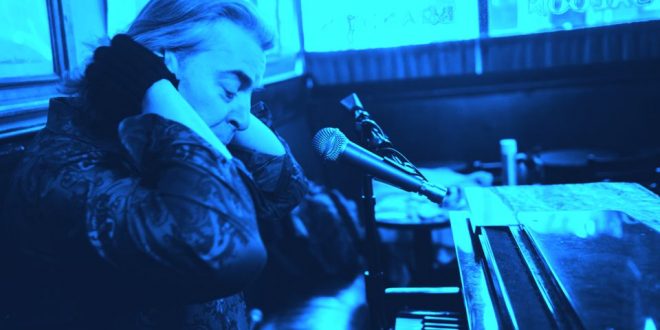 The late John Prine provided a unique voice to some of Americana’s greatest songs. His storytelling, his talent for finding the beauty in everyday people and plain livin’. Not as widely known, but just as poetic and talented is the witty Paul Mark & The Van Dorens. The New Yorkers’ new album Gravity (Radiation Records) goes from rag time piano beds, to country rock and even some romanticized tracks. Mark throws in a few zingers, too, often directed at both politicians and their sheep followers.

As a listener what I appreciated most about Mark is his writing. What a wordsmith! In the opening track, ““Gravity Is Failing” Mark captures the confusion and topsy-turvy state of affairs. It’s a fact, gravity is failing, look about…you can’t miss the signs, observe how the fallen now rise with ease! and how ladders are so much easier to climb, everybody! hold fast, everybody! hold on here, tie your desk, your dog, your child, to a tree, else rue the day when they levitate and disappear, he sings, all the while, he’s perfectly poised playing the piano. His voice has a hint of besmirched. It’s as if he’s shaking his head, shrugging his shoulders and bemoaning, “anyone else see what’s really going on?”

“I Spin, You Grin” has this Hepburn and Tracy quid pro quo vibe. It could easily be part of a movie soundtrack. I loved the innocence of the piano, the romantic tones. I went dizzy, I won’t deny, when I first got a load of your style, heat’s circulating, a storm’s percolating, when you’re radiating that smile, Mark sings. His voice, made for cabaret bar like singing. He sounds like he’s fresh from his 15 minute cigarette break and already five sips into his whiskey sour.

He’s not a one note guy, that’s for sure. In “Friend Gone Astray” the piano is a bit more subdued. A silhouette crossed the room, through the dark and din, he saw me just as I saw him, then a light went on, the friend gone astray, Mark sings, his voice dancing along to both the piano and a Southwest sounding hush of a guitar arrangement.

Mark’s western-fringe continues in the rockin’ “Heart Full of Soul”. And I know, that if she had me back again, well I would never make her sad, I’ve gotta heart full of soul, he yearns, the guitar tones both country western and garage rock. The tempo is quicker, the mood a mix between a movie soundtrack and a heartfelt, unrequited love. He’s feeling rejected and the listen shares that pain in the heavy guitar reverb.

And that renaissance-stamp Jesus, it’s a million mercies that are just passing through, we’ll drink in the new year, once this blizzard blows through, Mark sings in the final track “December at the P.O.”. He twists the narrative and envisions the holiday season from the vantage point of a poster worker. The long hours and what might be really happening in someone’s life is quite unique. Just like Mark himself, this song and all the tracks on Gravity are exceptional.

Share
Previous JTK’s new single “No Be Mouth (feat. Tunji)”
Next “I Can See Clearly Now” by The Side Deal