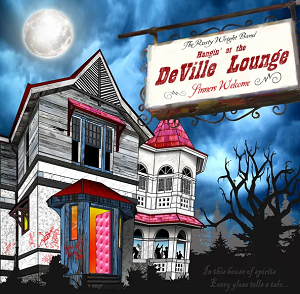 The act of listening to an album from front to back is still something more people than you think have trouble committing to; no judgment, of course, but the art of an album that is meant to be consumed in one sitting, front to back, is just about one of the finest things a band can bring to the table when it comes to their music. Concept albums sprung up as a way to almost ensure such media consumption, and whether it was The Beatles in full marching band regalia or Frank Sinatra taking you on a late night walk in the wee small hours, that seemed to be the new “thing.” Suddenly, everyone had to have a concept album in their discography and it ended up seeing diminishing returns on musical investments. The art of a concept album isn’t something you can just go out and perfect, but for those willing to put in the work? You’d be in the company of Marvin Gaye, Lou Reed, and Kate Bush — just make it good!

For The Rusty Wright Band, making it good has never been an issue. Be it in covers and reinterpretations with their 2018 release Playing My Respects or the rip-roaring road-trip staple Wonder Man from 2015, there’s a bottomless well of talent and inspiration at the band’s fingertips that isn’t showing any signs of drying out anytime soon. So, when the band came back into the recording world with the ambitious concept album Hangin’ At The DeVille Lounge, expectations were going to be high.

According to the band’s website, the record was “inspired by a real place from [lead singer] Rusty’s wayward youth in Flint, MI. This is his mystical, mythical, musical celebration of places and times that shaped a generation. Be it good or ill, the devil and all the angels were waiting to see what tales would be told. Come hear what tales we have to tell through Riff your bartender as he walks you through the House of Spirits.” Sounds great, right? Well, if you think the concept sounds enjoyable, the music sounds even better!

After opening with the entertaining place setting “DeVille Intro,” the album instantly dives headfirst into the blues with “House of Spirits.” It’s a slow, hypnotic blues-rock track that paints the picture of what’s to come with ease. An impressive opening that doesn’t disappoint, as follow-up tracks like “Devil Man Blues” and “Goin’ to Nola” really dig deep into the band’s blues background. Having a project like Playing My Respects in the band’s arsenal is a smart calling card; the influences are boldly displayed for fans to dig into, and there’s no worry of coming across as derivative when you’ve already shown your spin on classic material.

“Burnin’ Precious Time” is a knockout track that explodes its way into “Devil Music,” the album’s finale, and truly ends the project on a high note. The concept of the DeVille Lounge being a place of witchcraft and devilish intentions shine with the album’s finale, and the songs and concept manage to lift the project to great heights together. There’s a good deal for fans of rock and blues to dig into, but fans of any genre will be able to get into what the Rusty Wright Band has cooked up with Hangin’ At The DeVille Lounge. Just don’t stay too long, lest you have an eternity to waste!