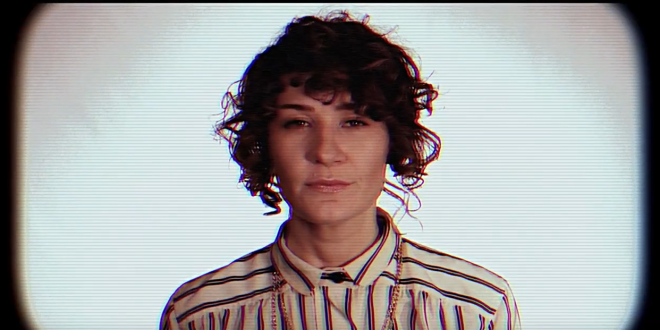 Marching out of the darkness and into the light, a slick beat finds Jasmine Bleile ready to bring the house down in the new single from her Satellītes project titled “Love & Darkness,” which is out now everywhere that independent music is sold and streamed. The bass is shadier than a trench coat-wearing man standing on a rainy street corner in the middle of the night, but it’s no more mysterious than the nocturnal groove following it in the percussion. Satellītes is an act that pop fiends have been discussing a lot this season, and it doesn’t take more than a casual analysis of the evocative threading in this song to see why.

Let’s start by dissecting the music video for “Love & Disaster.” We’ve got Bleile, a monotone background, acrylic fuzz and some shadows that dance amidst the rocking beat. On paper, there really isn’t much to look at in this piece, but in reality, Satellītes strings all of these elements together to make a really spellbinding, and somewhat mind-bending, visual experience that is just as enjoyable as the song is when consumed in its original album version. Despite its eccentric structure, I don’t think that this music video is so avant-garde that it would repel casual pop fans at all.

In the chorus, Bleile goes after the hook at a much slower pace than the instrumental melody is moving at, which in turn pushes all of the catharsis in the drum’s eruptive climax to the top of the mix. The building pressure becomes insurmountable at one point, and suddenly we’re awash with a vocal harmony that is so angelic that it might as well have come straight out of heaven. “Love & Disaster” rues the idea of giving unlimited affection to those unworthy of our warmth, but ironically it dishes out more unbridled heat than anything currently topping the charts does.

“Love & Disaster” is catching fire in the underground right now, and I think that if it gets into regular rotation on college radio both in and out of Canada this year, then Satellītes is going to become a lot more successful than any other project Bleile has been attached to in her professional life. She’s a free spirit in this track, and doesn’t hold anything back from us in her lyrical lashings nor her instrumental interludes. This is an unparalleled era in experimental music, but with artists like her taking the reigns as the decade closes out, I’m sure that we’re in for even more excitement as near the dawn of the 20’s.