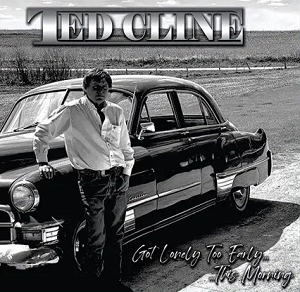 2020 has felt like the year of Americana no matter what channel of the pop music lexicon you’re interested in, but on the flip side of the movement, artists like Ted Cline have been inspired to keep the flag of puritan country music flying as high as ever before. Rather than incorporating a lot of external influences and surreal trends into his sound, Cline is exploiting an old fashioned style of western swing in his new single “Got Lonely Too Early This Morning” that will have cowboys and casual country fans alike more than a little interested in his sound this June.

“Got Lonely Too Early This Morning” doesn’t waste any time in laying a swaying beat down that instantly gets our hearts racing to the harmony it so carefully upholds. There aren’t any synthetic components adorning the percussion here; it’s straightforward, unfiltered and pulsating from the get-go. When you work with purely organic elements like Ted Cline is in this single, you don’t have to lean on any of the artificialities that have become all too commonplace in the Nashville establishment. He’s got no room for frills, and as a result, his is some of the leaner and meaner music out of his scene at the moment.

There’s a really rustic feel to some of the string parts in this track that is obviously authentic in tone even to the most novice of ears, and I think this type of an accent is what gives “Got Lonely Too Early This Morning” its old school charm. Cline is belting out the chorus with every ounce of emotion he’s got in his soul, and with a supple instrumental backdrop as his only stool to stand on, we’re able to experience his melodic abilities without anything to come between artist and audience.

The harmony in the chorus of “Got Lonely Too Early This Morning” is perhaps the most song-defining component in the whole of this track, and for me, it’s what won my favor in my initial sit-down with the single this past week. Country music’s mainstream beat has been leaving a lot to be desired in terms of colorful musicality, but for Ted Cline, his entire style of play is built around that very concept. He’s flamboyant with his vocal and as melodic as a smoky-voiced singer can be, and rather than translating as a throwback, he instead sounds like a member of the old guard here to remind us of what country can do when it’s given a little space to breathe.

To say that there aren’t many traditionalists like Mr. Ted Cline left in the country music genre nowadays would simply be too great an understatement for me to make. Cline doesn’t try to sell us anything alternative in “Got Lonely Too Early This Morning,” nor does he attempt to mess with an unbroken framework in his compositional technique. He’s the real article – a true cowboy – and a man who every country music enthusiast should be keeping a close eye on in 2020.

The music of TED CLINE has been heard all over the world in partnership with the radio plugging services offered by Musik and Film Radio Promotions Division.  Learn more https://musikandfilm.com