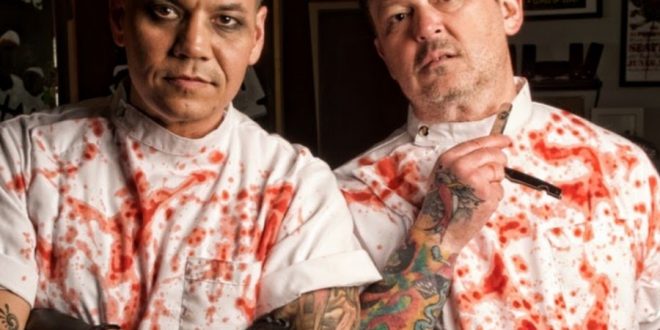 Rolling out of the darkness with a gust of distorted guitar venom, The Cutthroat Brothers’ “Psykik Chemist” opens in a haze of overdriven strings that are quickly met with a rollicking percussive beat which launches the bludgeoning bassline into the spacey atmosphere from where it was first plucked. There’s some adrenaline in the band as they tear through the riffs and accompanying verses, but nothing here feels rushed or pieced together in some halfhearted attempt at stadium rock; on the contrary, this sounds like a deliberately meticulous composition from The Cutthroat Brothers, and moreover, a flex of sonic muscle intended to give audiences around the globe a taste of what they’re capable of doing inside the four walls of a recording studio. “Psykik Chemist” is one heck of a summer rock single, and although it’s an admitted hybridity, it’s not so tethered to its experimental ethos as to reject the principles of mainstream pop/rock. This is a good acquisition for indie enthusiasts, but it wasn’t designed to satisfy their needs exclusively.

This track has a really weighty bassline, in the mixes for both the single and the music video, but its undeniable enormity doesn’t go without serving a very specific purpose here. There isn’t a stitch of unutilized space in this master mix, and thus, even the elements that are bursting at the seams with grandiosity feel efficient and free of the ridiculous pomposity that most rock groups on the mainstream side of the genre have been embracing lately (mostly in response to the trending minimalist pop movement). Everything here is very well-balanced, with the depth of the bass parts meeting their match in some razor-sharp riffing at the forefront of the track. “Psykik Chemist” is actually one of the smartest indie singles that I have had the pleasure of coming across this July, and it doesn’t surprise me at all that The Cutthroat Brothers have been raising an eyebrow or two both in and outside of their storied native scene with its release. Say what you will of their Seattle contemporaries’ relevance entering 2020, but this is one act that I cannot wait to hear more of.

The Cutthroat Brothers are issuing some blistering heavy rock here, and while the music video for “Psykik Chemist” is nothing short of sensational, the real treasure to behold is the substance behind the songcraft of the single. You can tell that there’s a lot of emotion in these two players, and though they’ve both spent the better part of their lives invested in professional music-making, they don’t sound like jaded veterans who lack the zest of wide-eyed rookies as they reenter the studio for the umpteenth time in their careers. They sound as excited and radically connected with their material as they ever did when they first got into this business, and that alone makes this track a fascinating listen for rock fans this season. I’m interested in hearing how they expand on the blueprint that has been set forth by the release of their debut album, but in any case, I plan on keeping a close eye on this band moving forward.